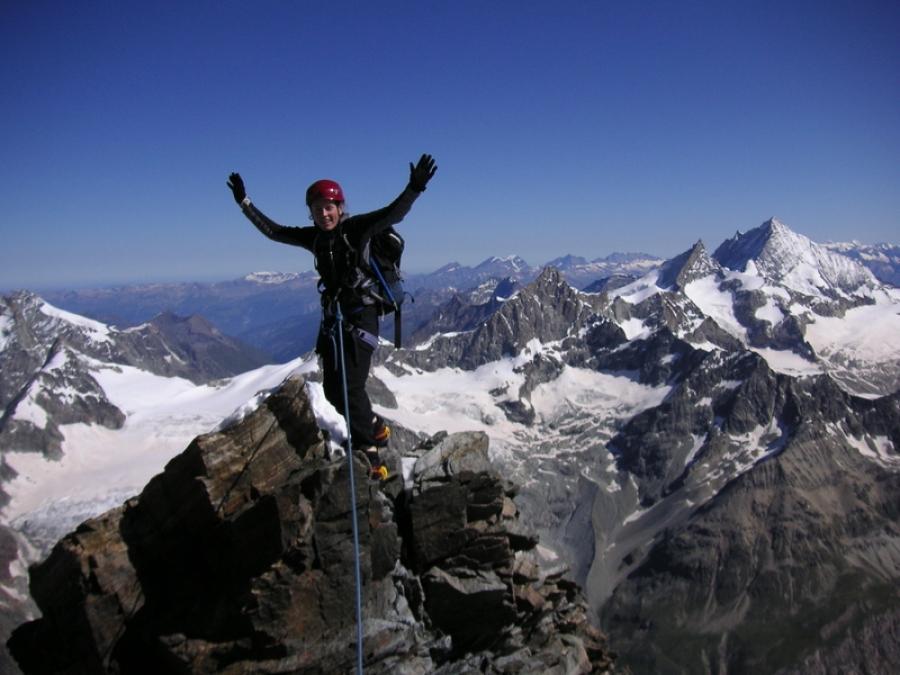 On top of the world: Caroline on the summit of the Matterhorn

Mont Blanc, the Matterhorn and the Eiger are the Alpine big three. Why climb them?

These peaks are busy under good weather and conditions, plus an attempt at each peak is a large investment in time and money. Wouldn’t it be easier just to view each peak via the latest internet app? Well of course not! The rewards of accomplishing these milestone mountains are far greater than the cost. Each peak represents a tangible milestone of achievement that once obtained is never erased. All three mountains are ‘household names’, even your curtain twitching neighbour who never leaves the house has heard of Mont Blanc, Matterhorn and the Eiger! An ascent of each mountain is a badge of honour which can be remembered through generations. Even though there are thousands of beautiful and challenging mountains in the world, there is satisfaction to be gained from climbing peaks that friends and family have heard of and can relate to.

Climbing the big three can take a single alpine season if the conditions and weather are kind, but for most this is a multi-year project. Usually it is Mont Blanc which is attempted first and although this is the highest, it is also the technically easiest and can be accomplished by a strong hill walker with just a little alpine climbing experience. The second peak is usually the Matterhorn, the level of stamina needed is similar to Mont Blanc, but the mountain is more technically demanding, and ranks as a ‘climbers peak’ rather than a walkers peak. The Eiger is left until last, it is more fickle in nature, conditions need to be just right to secure an ascent, plus it is more difficult to retreat from in bad weather. The Eiger is only for more experienced mountaineers with several routes of grade AD under their belt, an ascent of the Matterhorn would be perfect preparation!

Now to have a look at each peak in more detail: 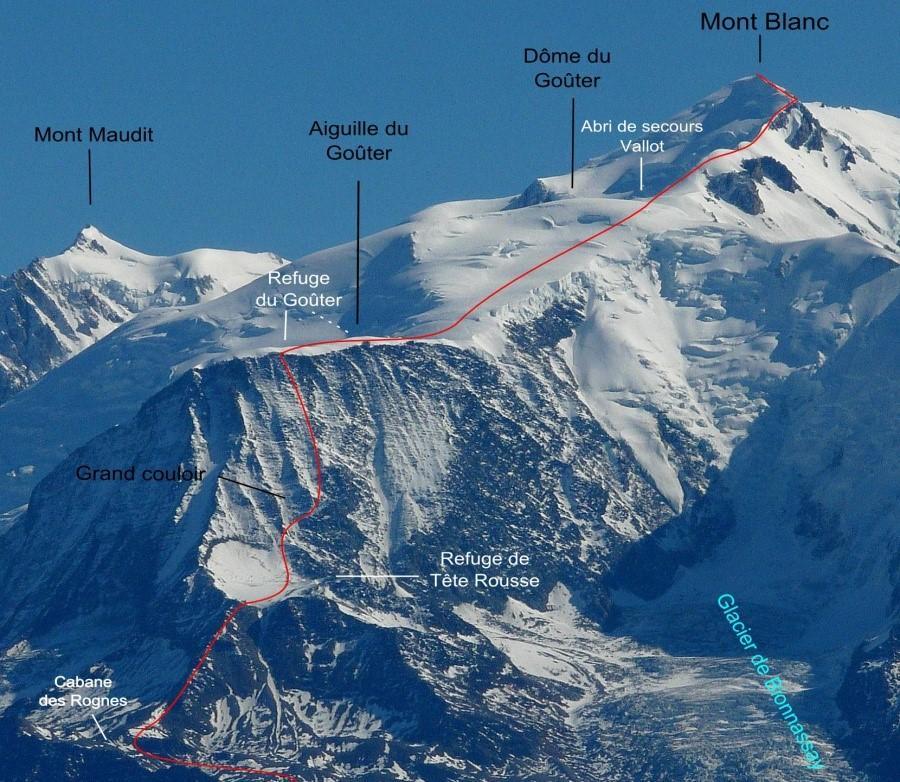 Overview: At 4810metres, Mont Blanc is the highest mountain in the Alps, and the highest peak in Western Europe by a margin of 200m (the second highest peak is the Dufourspitze in Switzerland). From the French side Mont Blanc looks like a huge white dome surrounded on all sides by tumbling glaciers and huge rock faces. There's a part of every mountaineer that wants to climb Mont Blanc and this is an achievable goal not only for experienced climbers but also for competent winter walkers. However this is never an easy mountain and should not be underestimated, serious alpine dangers await with stone fall, crevasses and seracs, not to mention the rigours of altitude.

Location: The Mont Blanc Massif lies between the regions of Aosta Valley, Italy, and Haute-Savoie, France.

Classic Route and Season: The Gouter Route starting from Les Houches or Saint Gervais is the easiest route and the most popular. Also popular but more difficult and committing is the La Voie des 3 Monts or more simply ‘The Traverse’ starting from the Aiguille du Midi, Chamonix. The mountain is predominantly climbed throughout the summer season from June though to the end of September.

Difficulty and Experience required: Technically straightforward, mainly walking. High on the mountain there are sections of rock scrambling and walking with crampons and ice axe. Most of the difficulty lies in climbing at altitude. On our six day course (which includes a full training program), no previous experience is necessary other than being a strong and fit hill walker.

History: The first recorded ascent of Mont Blanc was on 8 August 1786 by Jacques Balmat and the doctor Michel Paccard. This climb, initiated by Horace-Bénédict de Saussure, who gave a reward for the successful ascent, traditionally marks the start of modern mountaineering. The first woman to reach the summit was Marie Paradis in 1808

Why Climb Mont Blanc? For the challenge and the bragging rights of the ‘big tick’ and that moment when you are the highest person in Western Europe. 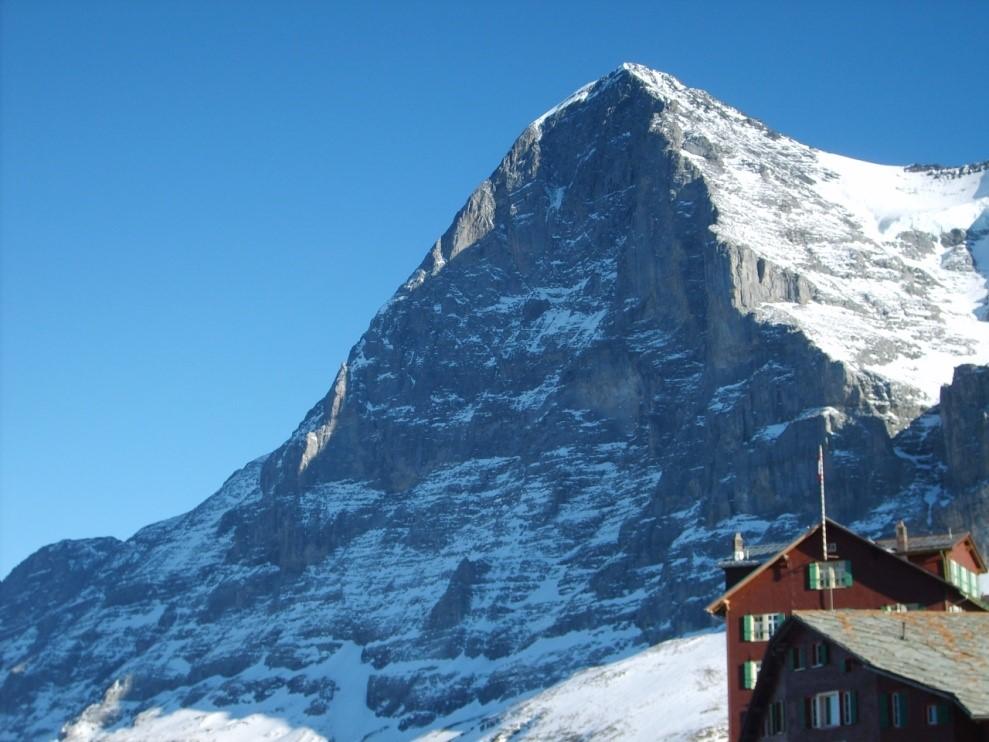 Overview: The Eiger, whose name means Ogre, is appropriately named for the severity of its towering North Face. This mountain is the farthest east of the famous trio ‘Eiger, Mönch and Jungfrau’. Of the three mountains, the Eiger is the most spectacular, a striking peak from all sides and a worthy climb by any of its many routes, none of which are particularly easy. Because if it’s notorious North Face, the Eiger is one of the most famous and written about peaks in the world. The battle to climb this face has captivated the interest of climbers and non-climbers alike since the time of the first note worthy attempt in 1934.

Location: The Eiger is located within the Bernese Oberland region of the canton of Bern, Switzerland

Classic Route: Fortunately, the Eiger hosts much easier (but not to be underestimated) routes than it’s fearsome North Face. There are three routes which offer classic alpine climbing at a reasonable grade: The South Ridge, The Mittellegi Ridge and the West Flank. The Mittellegi Ridge and the South Ridge are both very fine ridge climbs, but with sections of snow and glacier. The West Flank is less ascetic and usually used as a descent route.

Season: From July through to mid-September

Difficulty and Experience required: The South Ridge is graded AD and is a long climb with sustained difficulty. The climb is mainly on rock but also with mixed with icy passages. The ground is exposed and requires care, but also an ability to move quickly over it. The South Ridge is for experienced mountaineers only who have already done routes of grade AD or greater. The Mittelegi Ridge AD+/D is a harder again, with greater exposure. Climbers need to be comfortable climbing UK grade ‘Difficult’ in big boots with a rucksack. Read more if you are LOOKING TO BAG MONTBLANC IN 2021

Why Climb the Eiger? To conquer one of the worlds most famous and notorious mountains and to stare down the vastness of the Eiger North Face. 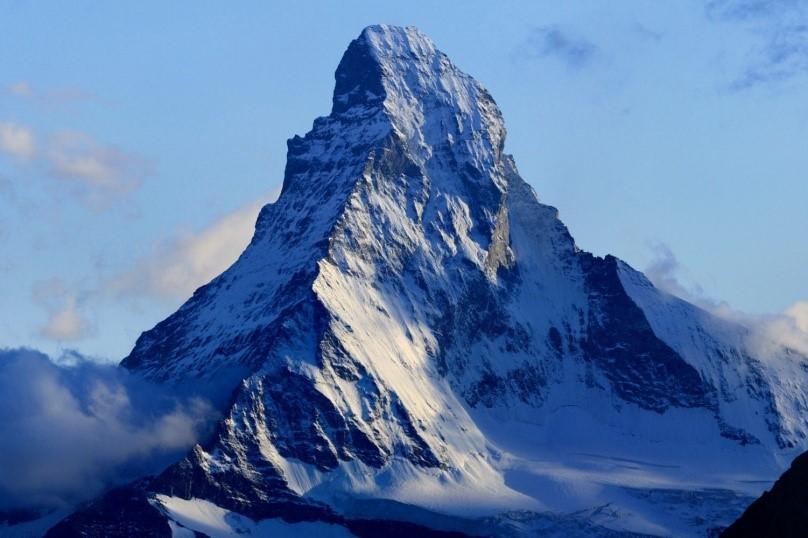 Overview: The Matterhorn is the most easily recognised peak in the world. Compared to most alpine peaks it looks impossibly steep and uncompromising. But on the other hand it is a popular mountain which (during the season) is climbed on a daily basis by fit and determined people with varying amounts of experience. The route is both complex and exposed, so it is a necessity that the leader knows the mountain well. We would never advise attempting the peak without using a qualified guide. The Matterhorn is not an easy peak, even when in good condition it presents a considerable physical and psychological challenge, both in length, continuous exposure, and a need to move quickly. The route is essentially a rock climb, though crampons are usually worn from the Shoulder upward. The climbing is continuously steep, but rarely technically difficult. For many mountaineers an ascent of the mountain is the crown jewel in their careers, and always represents an important and unforgettable mile stone.

Location: The Matterhorn lies in the Pennine Alps on the border between the Swiss Valais and Italy Valle d'Aosta. The mountain can be reached via the famous mountain town of Zermatt in Switzerland or Cervinia in Italy.

Classic Route: The Hornli ridge, sometimes called the North East Ridge, accessed from Zermatt is the easiest and most often climbed route. Sometimes the ‘Lion’ ridge from Italy is climbed; however this route is longer and technically more difficult.

Season: The mountain is best climbed when the rocks are dry and free of snow and verglass. The second half of the summer and into early autumn. Mid-July until the end of September are the most likely months.

Difficulty and Experience required: Grade AD, long and strenuous with the same route taken on descent. Previous alpine climbing experience essential, especially scrambling ability and general sure footedness. Should be able to climb UK grade ‘difficult’ easily in big boots with a rucksack on. A high degree of general fitness is a necessity with few rests during a 12 hour day. Read more about CLIMBING THE MATTERHORN - HOW HARD IS IT?

History: The Matterhorn was long considered too difficult to climb. On 14 July 1865, the British climber Edward Whymper reached the top together with three mountain guides and three other English climbers. Only three people survived the descent.

Why Climb the Matterhorn? For the chance to stand on the top of the worlds most iconic mountain, of which there is no easy way to the top. Widely recognised as a difficult challenge.