The Tour du 'not so much' Soleil! 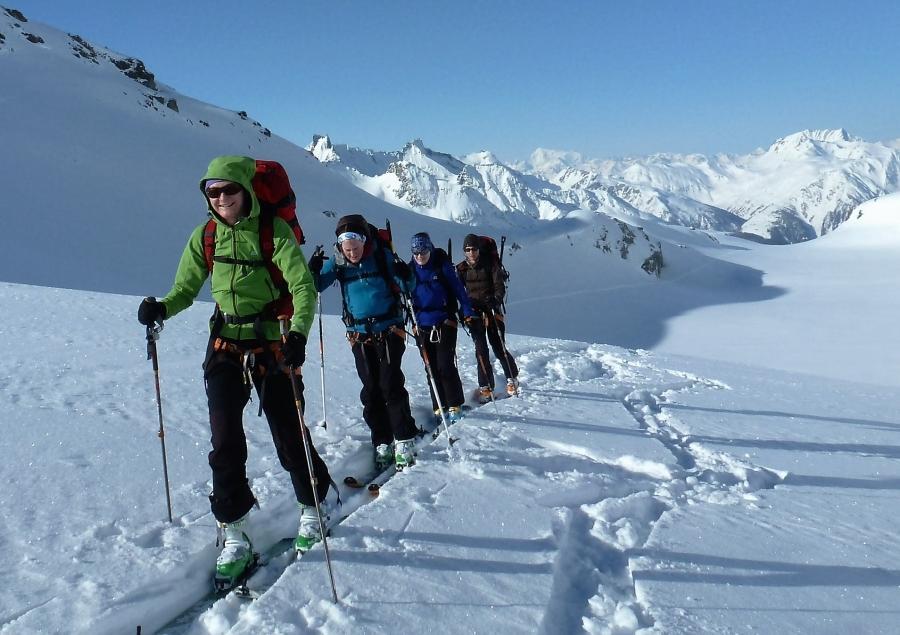 The Tour du 'not so much' Soleil!

Every year the cutting edge of Edinburgh's female fell running contingent (aka the "Hunters Bog Trotters") come to the Alps for a weeks ski touring. This year the team settled on the Tour du Soleil, a little known tour which straddles the Italian Swiss border from Fiesch to Andermatt.

After a night in Andermatt catching up and some extensive kit faffing we were ready for the adventure ahead. Climbing aboard the early train to Fiesch was a little tricky whilst balancing coffee cups, skis and poles in our hands. In Fiesch another minor drama unfolded when one of the teams boot buckle broke requiring a rapid fix at the local sports shop before hopping into a taxi to the trailhead in the tiny hamlet of Binn. The forecast for the week was pretty mixed but the HBT's being hardy Scots weren't phased. True to the forecast no sooner had we jumped out of the taxi and it started snowing!

Our objective for the day was the Mittelberg Hut 4 hours up the valley. It was probably the only day of the winter that I broke into a sweat with the ladies right on my heels despite telling them its not a race! At the end of the valley I managed to get a breather and turn the tables as we had to climb steeply up a very icy hillside to the hut. Unsurprisingly we were reduced to a nice slow pace, ski crampons, some swearing and comedy kick turns on the steepest corners. As I chopped out the track with my ice axe I could see one of the group was contemplating using it on me. 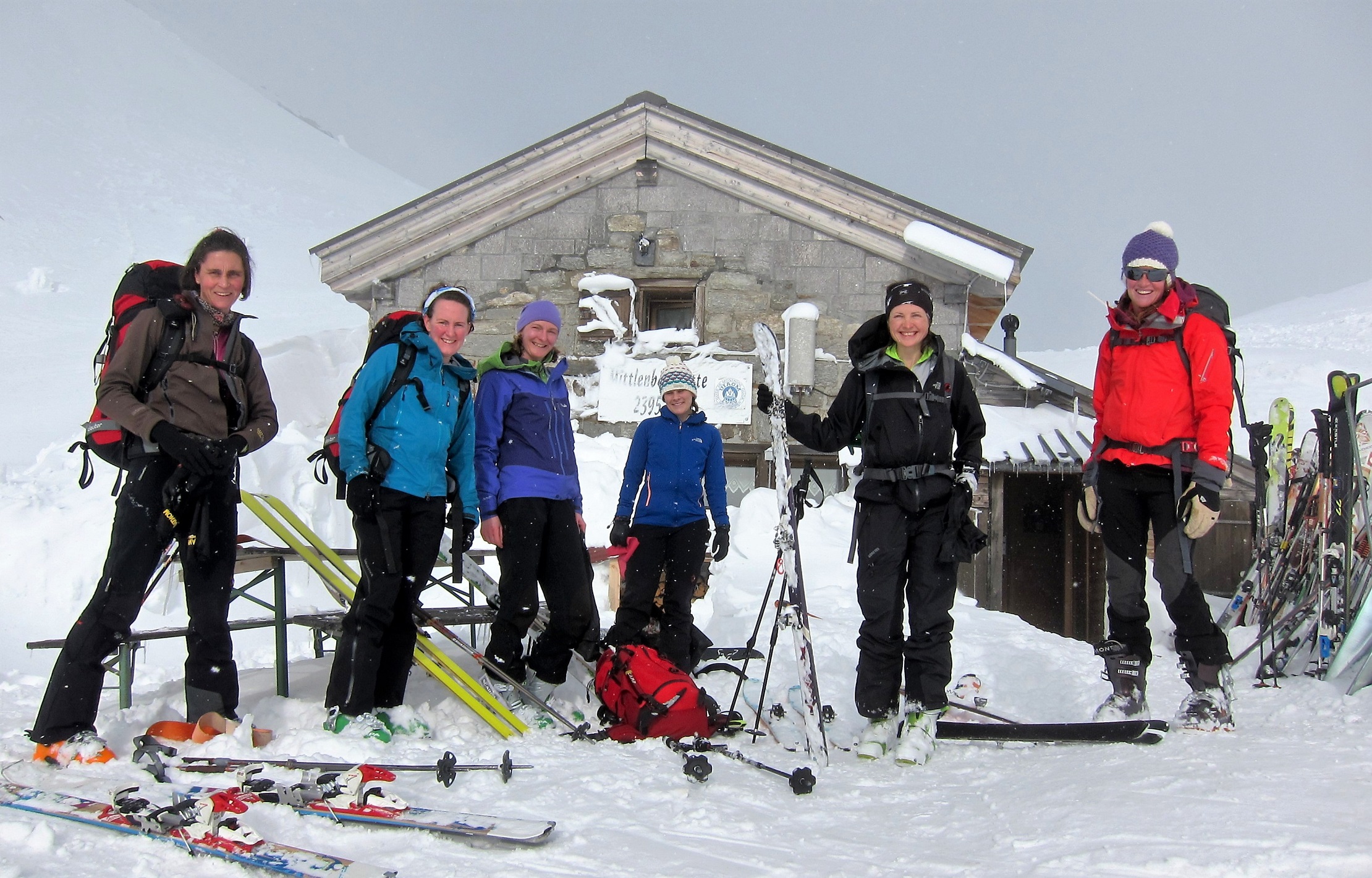 We arrived at the Mittelberg Hut perched on a cliff and the clouds cleared affording us brief views of the Zermatt peaks to the south. The hut was very compact with only 25 bed spaces. Luckily we had booked ahead so no spooning was necessary. The Guardian was rather eccentric but very welcoming with hot tea, beer and a huge pasta dinner.

Monday morning broke with blue skies and all the views we'd missed the previous day. By 7am we were on our skis and working our way up the hillside in 30cm of fresh snow. It was tough going breaking trail so I employed our secret weapon, the 'Gordonator'! Clair (the Gordonator) has a likeness to the Duracell Bunny, her batteries never run out. We pointed her in the rough direction of our goal and off she went ploughing a furrow up the hill. A few directional pointers from me and we soon arrived at the col below the Offenhorn. This gave us a great view of todays peak (Offenhorn 3235m) and the next hut shrouded in a beautiful cloud inversion below.

After studying the map I decided to take the less steep track to the summit and thus avoiding steep kick turns. The girls were overjoyed at this until half an hour up the hill it started to get very steep and we were back to sketchy kick turns with ski crampons, me chopping the track and Megan threatening to kill me again! The 'Gordonator' had now been slowed to a snails pace but did her best to rush every kick turn oblivious to the consequences and my frayed nerves. We all arrived safely on the summit and had the most amazing 360 degree panorama whilst I contemplated the descent. Boots tightened and skins off we skied the first pitch of dream powder. I do have to add here that the HBT are Jedi uphill skiers but the downhills can be a rather exciting spectacle to watch! The Swiss team behind us were rather shocked. It was comparable to opening a bag of marbles on the hillside with folks skiing, and rolling in all directions. Who needs Swiss ski style? We were having much more fun destroying the hillside!

Post descent and the sun was starting to scorch us on the glacier for the final climb to the Hohsand Joch on the Swiss Italian border. By this time team HBT had got their ski legs back and were less marble-like in descending the Hohsand glacier. We managed some pretty tidy turns in perfect shin deep powder to the Refuge Cladio e Bruno (2710m) . Now being in Italy we made the most of cheap beer and real coffee. The girls were delighted with the above average washing facilities. We settled down to an evening of beer 'Bananagrams' and pasta.

At 6 am the following morning, I peered out of the window and the view was truly white! A thick mist with the odd snow flake hung around the refuge. Time for a third Cappuccino! Despite me wanting to stay in the hut and eat pasta the girls insisted we 'stopped being soft' and a “crap day in the Alps” was apparently a “bonny day in Scotland”. We set off up the hill into the mist with Team Swiss following always at a kick turns length behind. The team were now getting pretty good at steep kick turns which were made a lot less stressful by the fact you couldn't see the drop below. All the way up I was in optimistic spirits hoping the weather would clear as we reached the col back into Switzerland. It didn’t and we were faced with a big descent in awesome snow but with poor visibility and the odd crevasse to spice things up.

Normally I would have turned round and gone back for cappuccino number 4 and more pasta but I could feel six sets of hardened Scottish fell runners' eyes staring at me. Ok! No pressure then, to be honest I was pretty happy to give it a go as we had the 'Gordanator' and other equally fit girls who can all map read as well as me. Team HBT sketched there way down the glacier following my tracks navigating on my altimeter compass bearing and Julia (my wife) on backup GPS. I found the descent quite stressful as it was hard to see what was up or down with no tracks and plenty of ditches and a reservoir to fall into. Luckily I found the reservoir without falling into it but the weather had now deteriorated into a blizzard.

Traversing round the reservoir and round the Dam is usually easy but not being able to see made the steep slopes treacherous with heightened avalanche risk and large settlement cracks around the edge to fall into. We could see the dam at the end just peering out of the mist but there was no discernible way of getting above it and onto safe ground. The team spread out and were on red alert for avalanche prone slopes. It was slow going but we weaved a shallow line up the hillside onto the dam to what we thought was easy ground but we were wrong. Our final hundred meters of steep ground above the reservoir was covered in half a meter of fresh wind slab so skinning up it wasn't an option. Plan B involved wading in crampons directly up the slope next to a rocky outcrop and relative safety. After all that we were glad of a technically easy descent to the Swiss Corno Gries hut where we stopped for more coffee and cake. It was still a white out when we left the hut on route to the Italian Refugio Pianasecco. The decent was pretty cruisy down the old road to the small hamlet of All'Aqua then anther 2 hour climb to the hut. We arrived just in time for dinner, the lady running the hut was pleased to see us as we were the only idiots daft enough to try and get there in the truly Scottish weather. There was a roaring stove and great Italian food which more than compensated for a long day.

The next morning the weather was very poor so we descended back to Al'Aqua and opted for a train ride to Andermatt. The terrain between the Pianasecco Hut and the Rotundo Hut is pretty serious in bad weather. Despite an apparently stress free train ride I managed to get the wrong platform and the team headed into Italy in completely the wrong direction. After realising our error we explained to the conductor what had happened. He looked pretty pissed off with us and explained that 3 of the team had run in front of the train across the track so they didn't miss it. We did some grovelling and then had to buy another ticket back to where we had come from.

Back in Andermatt we had an afternoon of awesome powder but zero visibility. Luckily I know the off-piste really well so we didn't have any mishaps. We then headed to the Rotundo hut to complete the last two days of our journey in the opposite direction as the forecast was better. On the way up to the hut we deployed or secret weapon again and "the G" broke trail for 4 hours without even breaking into a sweat. It was the pied piper leading and several teams following including another Mountain Tracks team. The Rotundo hut  was very lively that evening with plenty of beer and banter flowing between teams.

The final day was again dictated by the weather the Tour du Soleil was rechristened to " Tour not so Soleil". We opted to join forces with the other teams and head up the Winterwasseren Horn which is a great option if the avalanche risk is high and the visibility poor. We skinned to the summit in high spirits despite the weather. Occasionally there was a break in the cloud revealing the classic peaks around Piz Lucendro and Piz Rotundo. One advantage of poor weather is you get some awesome snow on the descents. This time the team had fresh tracks down to Realp and a well earned beer.

Despite the best efforts of the weather to derail our plans we managed to ski every day and nearly complete the whole journey. The question for next year is where to deploy the 'Gordonator' for more uphill training?! 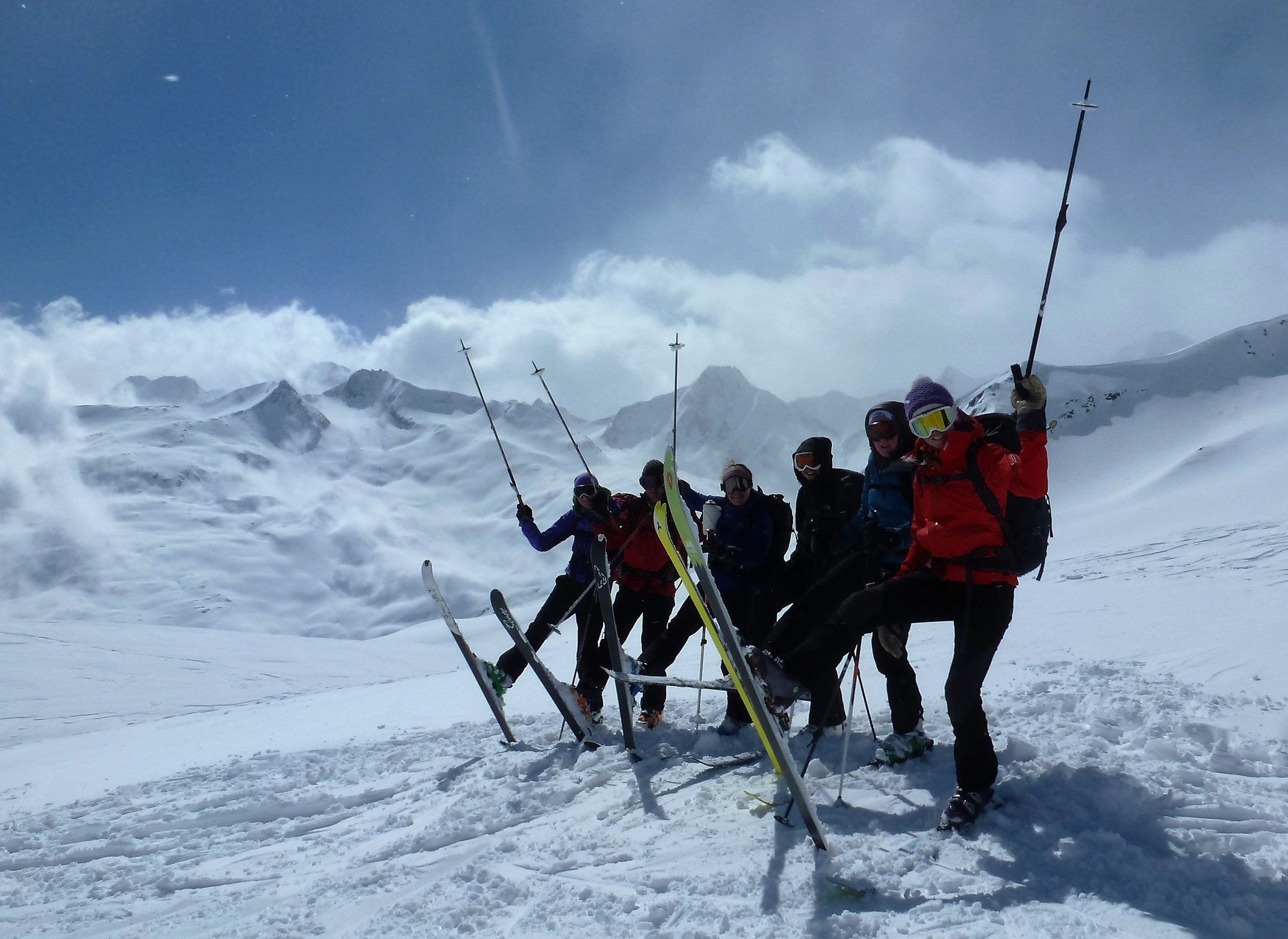