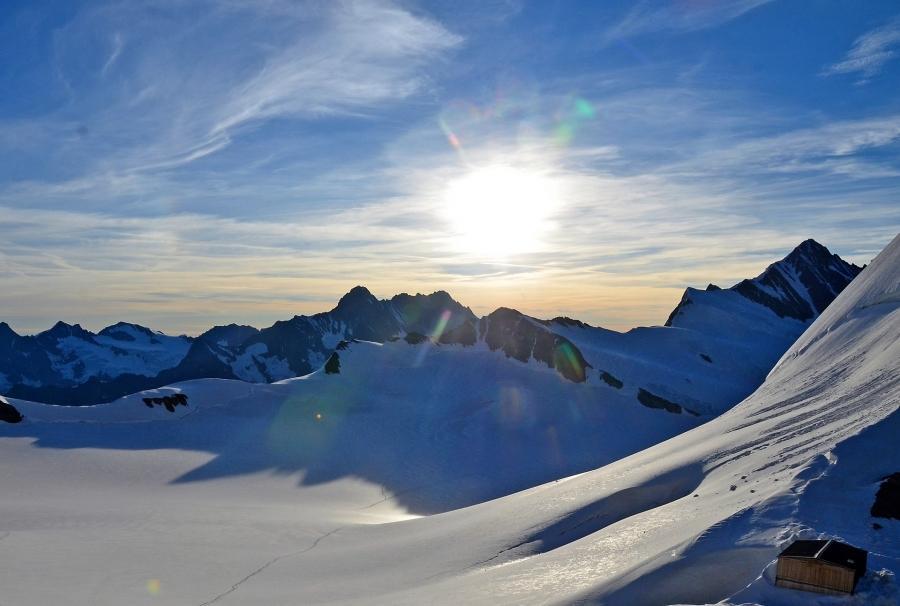 The Top of Europe

Summer in Grindelwald is an odd mix of frenetic Japanese tourists with a sprinkling of climbers and walkers. It was mine and Tim's meeting place for the planned week of bagging some classic Bernese Oberland Peaks. Despite the tourist chaos, Gridelwald's position nestled below the Eiger gives it great gravitas. Tim was blown away by the North Face's size and complexity which for me is nearly as intimidating as the Kleiner Scheidegg gift shop!

Next stop on our journey was to the 'Top Of Europe' via the Jungfraujoch Railway. As with most things in Switzerland it's eye-wateringly expensive but offset by the fact that it's a) spectacular and b) it saves you nearly 2000m of uphill! On the way up Tim and I made the most of the train stops to gawp at the view from the Eiger Nordwand window and a postage stamp sized Grindelwald below. We both had a chuckle about 'The Eiger Sanction', Tim promptly telling some tourists we were real Mountaineers unlike 'Clint Eastwood'.

Arriving at the Jungfraujoch the intoxicating smell of the curry (there's an Indian restaurant) mingles with the equally intoxicating views. Tim took a few snaps from the numerous viewing platforms then we headed down the chilly tunnels to the Jungfraufirn Glacier. The sheer enormity of the Bernese Oberland then hits you with panoramics of all the major peaks. We roped up and headed off up the easy track to the Monchjoch Hut (3627m). Tim took his time as day one at that altitude takes its toll on someone who's from Holland! Tim and I played along with the Dutch theme all week with Tim very keen to extoll the virtues of clogs, windmills and Amsterdams coffee shops!

We booked into the Monchjoch hut dumped some kit (including 6 litres of extra water as its about £12 a bottle in the hut) and headed of up our acclimatisation peak. Trugberg (3880m) is directly opposite the hut and its rocky ridge is great fun. Even though its only 250m of vertical from the hut a direct ascent along the ridge can be quite time-consuming. There is an easier way up the South-east flank but its a longer walk. This was Tim's first experience of Oberland rock and he soon realised its not like Chamonix granite and proceeded to pull off several holds along the ridge. (Note to oneself: treat the rock like Weetabix!) Standing on the North summit (3850m) we were treated to spectacular views with headaches to match. The summit's 360 degree panorama included all our week's objectives: the Monch (4107m), Jungfrau (4158m), Gross Fiescherhorn (4048m) and the Finsteraarhorn (4273m). Back at the hut we settled in for an evening of necking Ibuprofen, eating Rosti and drinking Weissbeer.

We both decided comfort mountaineering was the name of the game and trundled down for a leisurely breakfast a 7am. The Monch (4107m) is a great introduction to the area with some nice rocky climbing. On the tricky bits there are fixed spikes and pegs but it never really gets that hard. Having said this it's not easy as the guidebook suggest so treat the PD grade as given for it's relative short length and close proximity to civilisation. Conditions were perfect and starting from the hut we managed to miss the teams coming up on the first train. We summited at 11.30 and chilled out in the sun watching the ant like climbers following us up. Whilst descending the narrow summit ridge we had a few precarious moments passing other teams who weren't quite as confident balancing one foot in front of the other. Back to the hut for more Rosti, Weissbeer and Ibuprofen.

Day three and the Jungfrau (4158m) was firmly in our sights. Alas no comfort start today we were up for a 4am breakfast and off within an hour. The Jungfrau is a longer day with most of the difficulties on steep snow. An early start allowed us to avoid the slopes being a harrowing slushfest on descent. There were quite a few parties heading our way so the hut's boot room was the usual chaotic melange of people trying on the wrong boots and crampons! We managed to get a head start on most teams, roped up for the glacier and headed out into the darkness. There's something quite magical, frost crunching under your crampons and following the cone of light from your head torch with the backdrop of a thousand stars. Dawn arrived with an orange hue over the Aletchhorn, time for a drink and snack before the easy rock step. By the time we got to the Rottalsattel the sun was fully up and we could see the steep snow slope that guards the summit. Some years this snow slope can be very icy so the local guides fix steel stakes at 30m intervals. Tim and I puffed and panted up the steep slope but the steps were still frozen so we made rapid progress. After an hour we reached the easy summit rocks and relaxed taking in the vista and snapping a few pictures. I was keen to get down before the sun melted the track so we reversed our steps on the snow slope to the saddle. There we could relax as its pretty mellow below the Rottalsattel so we lounged around watching other teams. The frozen descent slope was now softening and a few teams were regretting not setting out earlier. I'm not sure what 'thank god for those metal spikes' is in Swiss German but there was plenty of shouting and random rope shenanigans going on!

Back in the Monchjoch hut we got an updated weather forecast and an afternoon power nap. The forecast looked mint so we decided to go for broke. We were both well acclimatised and feeling pretty strong so traversing from the Monchjoch hut early the next morning across the Ewigschneefeld or as we named it 'earwigs ski field' felt like a breeze. We ascended towards the Fieschersattel and then the fun began! Tim and I both looked at each other and then down into the black hole of a Bergschrund in front. I dropped all the coils I dared and shouted at Tim to keep the rope 'piano wire tight'. I managed to climb into and then out of the hole with some tentative moments on hollow snow to a sort of stance (ie bury an axe, dig a bucket seat, cross you fingers and hope no one falls in). Safely across we now had to negotiate the choss-filled gully up to the Fieschersattel. Its not far but after day one's 'Weetabix' experience Tim was well versed in the art of disposable holds and 'swarming'. This is a special technique used in those situations where you want to equally weight (or not weight) all the holds with several points of contact including the good old 'alpine knee'. I did mention to Tim at the top I'd only skied down it in winter and it was pretty solid then. Tim just shot me a glance which didn't mask his thoughts, 'Olly you're a muppet'!

After this much excitement we bailed on the Grosser Fieschhorn and made do with the Hinter. The descent down to the Finsteraarhorn hut is very long. I was acutely aware we had to keep our whits about us as the descent track is heavily crevassed and at one point threatened by serac fall. We had been on the go for 10 hours by the time we fell into the hut, desperate for a cup of tea and cake.

The Finsterarrhorn (4273m) is the biggest peak in the Oberland and our final objective. We both found it hard getting out of bed for a 3am breakfast. It's always a case of forcing stale bread and jam down with lots of coffee, a bit of tactical jiggling around then off to the loo before you put your harness on. Once we were out of the hut the 3 coffees and bitterly cold air soon woke us up. The first part of the route ascends a steep glacier and crosses a rocky spur onto another glacier. Tim and I were both firing on all cylinders now arriving at the Hugisattel just as the sun was rising over the Lauteraarhorn. From this saddle the route follows an exposed rocky ridge to the summit. It was pretty icy so we kept our crampons on to the summit. I was conscious of the time so we took a few pictures, admired the unparalleled views and then reversed the route in descent. Everything was going swimmingly until we reached the glacier above the hut. The sun had now reached furnace level overhead and the ascent tracks had melted out. Finding our way through the crevasse field was an absolute mission that wasted an hour of my patience and included the odd exciting moment where one of us would step through a slushy snow bridge and into the abyss. We both breathed a sigh of relief as we reached the easy rocks above the hut smug in the knowledge that most of the teams behind us were in for a tough time.

The final day was a long walk over the Grunhornlucke to the Konkordiaplatx and back to the Jungfraujoch. Tim and I were cursing in the midday sun as the glacier was frying us. At one point Tim started hallucinating about helicopter rides to Grindelwald or exiting down the Aletsch glacier to Fiesch. I assured him that the helicopter option was only possible if we engineered an accident and the second option walking to the cable car above Fiesch may involve a full knee replacement. We both ran out of water well before the top and quenched our thirst on 'snow lollies'.

On reaching the Jungfraujoch both of us downed a beer and proceeded to get the mother of all headaches. The joys of mountaineering, but what an amazing week!

Huts
All huts take Swiss Francs and Euros (poor exchange rate) some take Credit Cards.
Monchjoch Hut (SAC)
Finsteraarhorn Hut (SAC)
Konkordia Hut (SAC)
Some of the huts 'might' allow you to stay in their winter rooms and cook for yourself.
Stealth Bivvying in the Jungfraujoch tunnels?!

If you would like a guided mountaineering trip similar to the above have a look at our Oberland 4000ers week.

Walkers and Trekkers can enjoy the scenery and trek across the spectacular glaciers without having to climb any peaks on our Bernese Oberland trek.