A Stunning Haute Route...This time in the Pyreness! 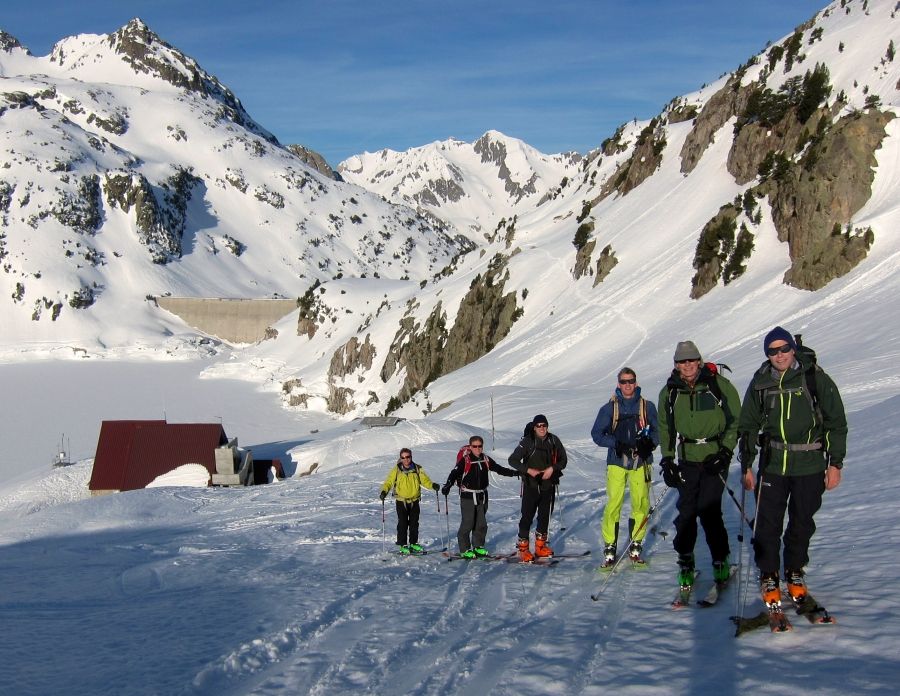 At Mountain Tracks we are always searching for new and alternative ski touring destinations. In the Pyrenees, ski touring has been practiced for almost as long as in the Alps but remains a lesser known destination, and is simply off-the-radar for most skiers working their way through Europe’s classic tours. However, news filtered through from travelling ski guides and adventurous ski journalists that the area was vast, quiet, stunningly beautiful and has a much better snow record than imagined.

Last year, with the help of Jose, a Spanish guide I met on the Monte Rosa tour, I started researching possibilities. I quickly discovered the number of route possibilities was simply endless, spanning 2 countries and hundreds of miles of terrain! But ultimately I had to boil it down so we could offer one classic ‘haute route’ tour (at least to begin with). We ended up with a six-day itinerary, traversing a section of the long distance walking route; the GR10 and criss-crossing the French/Spanish border. The route travels from West to East and lies entirely within the Pyrenees National Park. There is historical significance to several parts of the route, the major passes being used heavily in World War II and the Spanish Civil War. Highlights of the trip include an ascent of the highest peak in the French Pyrenees: Vignemale (3289m), crossing through the dramatic ‘rock door’ to Spain; the Breche de Roland and the decent into the magnificent Cirque du Gavarnie on the final day.

We first offered the trip in April 2013 and the route sparked the interest of the London- based Nott family, all experienced ski tourers looking for a new adventure. We met to begin the tour in the pretty town of Argelès-Gazost, close to Lourdes and right below the Pyrenean chain.

Days 1 and 2: The original plan was to drive south up the Vallee de Arrens towards the massif of the Balaitous, one of the highest peaks in the chain and to skin over to the Col de Martin (2295) into Spain and onto the Respumoso Refuge. However we were disappointed to find the road was closed due to rock fall. So we diverted to the small ski resort of Cauterets and skinned into the mountains and via the Marcadau valley and stayed for two nights at the delightfully situated Wallen refuge.  Our first look at the high peaks of the Pyrenees we were impressed by how dramatic and steep the terrain looked. Day two brought mediocre weather so we explored the area around the Wallen, finding some great powder in-between knarled Larch and Yew trees.

Day 3: After an early start, we embarked on the long skin south east towards Vignemale, the highest mountain in the chain and over the Col d'Arratille and down for a brief visit to Spain with striking views of the west face of the Vignemale. We then skinned back up the other side across back into France via the Col des Mulets and an east facing descent taking us down to the Oulettes Refuge a smaller hut that lies in a flat valley facing the daunting north face of the Grande Vignemale. We had seen a dozen or so ski tourers at the Wallen refuge, but nobody else at the Oulettes, the hut was Gardened by a friendly lady who informed us we were the first guests in 10 days! 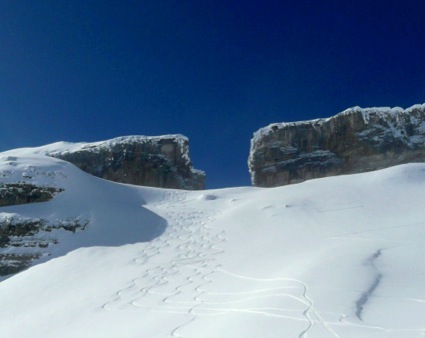 Day 4: Wednesday was a long and tough day. Strong afternoon sun followed by a cold night had melted, then frozen hard the west-facing slopes of the previous afternoon and the 600m climb to the Hourquette d’Ossoue col (2734m) was a challenge. For a sizable section we had to carry our skies on our rucksacks because the refrozen snow was so hard. The climb was fairly steep, but the last 100 feet was solid ice. However once over the pass we were greeted by strong sunshine which would eventually soften the snow. From the Hourquette d’Ossoue col we embarked on one of the best descent of the trip, a 1000m ski down a steep v shaped gully on hard pack and spring snow. Being a terrain trap, this gully is notable for its avalanche danger, however being relatively early in the day, the snow was very firm and the danger was negligible. Eventually the gully broadens into a river valley and long flat section took us to the Refuge la Granges de Holle.

Day 5: On Thursday we hoped to use the ski lifts in Gavarnie to regain some height, however the lifts were shut, so instead we made a long skin towards the Breche de Roland (2800m) entirely under our own steam. We broke the journey at the Saradets refuge right below the Breche. The Breche de Roland is a spectacular natural gap in a huge rock wall, it is 40 m across and 100 m deep. One side is French and the other side Spanish. This place offers one of the most photographed and spectacular views in the chain. During our night at the Saradets, it snowed 30cm, and better weather was forecasted so we were excited about the coming powder day.

Day 6: 7am, the sky was perfect blue and the Breche loomed ahead, like something out of a movie set. Looking at it from below, it really looked like someone had taken great care to carve such a massive passageway through the rock. We skinned up to the Breche, taking our time to enjoy the solitude in this wonderful place. The long descent back to civilization was the most memorable of the trip. The first half we skied immaculate powder below the cirque du Gavarnie and along the Valle d’Ousse. The cirque is a huge rock amphitheatre, with the town of Gavarnie nestling below. To get to the road-head we had to stomp the final hour on foot. But the tired legs were soon forgotten after the celebratory beers in Gavarnie.

Our first Pyrenean tour had been a challenging trip and a bone fide adventure by anyone’s standards. The rumours had proved to be true, the area is a wonderland for the ski tourer and with seemingly endless further potential. The mountains are steep and on a grand scale. We enjoyed quiet, unspoiled environments and great hospitality in the huts. During the 2013 season there was plenty of snow, several meters deep in places. On our week, the weather was mixed which held us back, but that’s a lottery wherever we ski.

Thanks to the Nott family for the great company and helping to path-find this trip with Mountain Tracks. 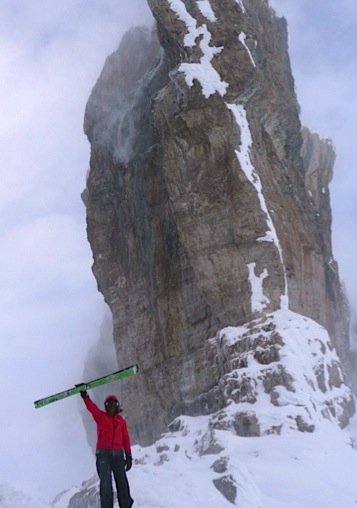