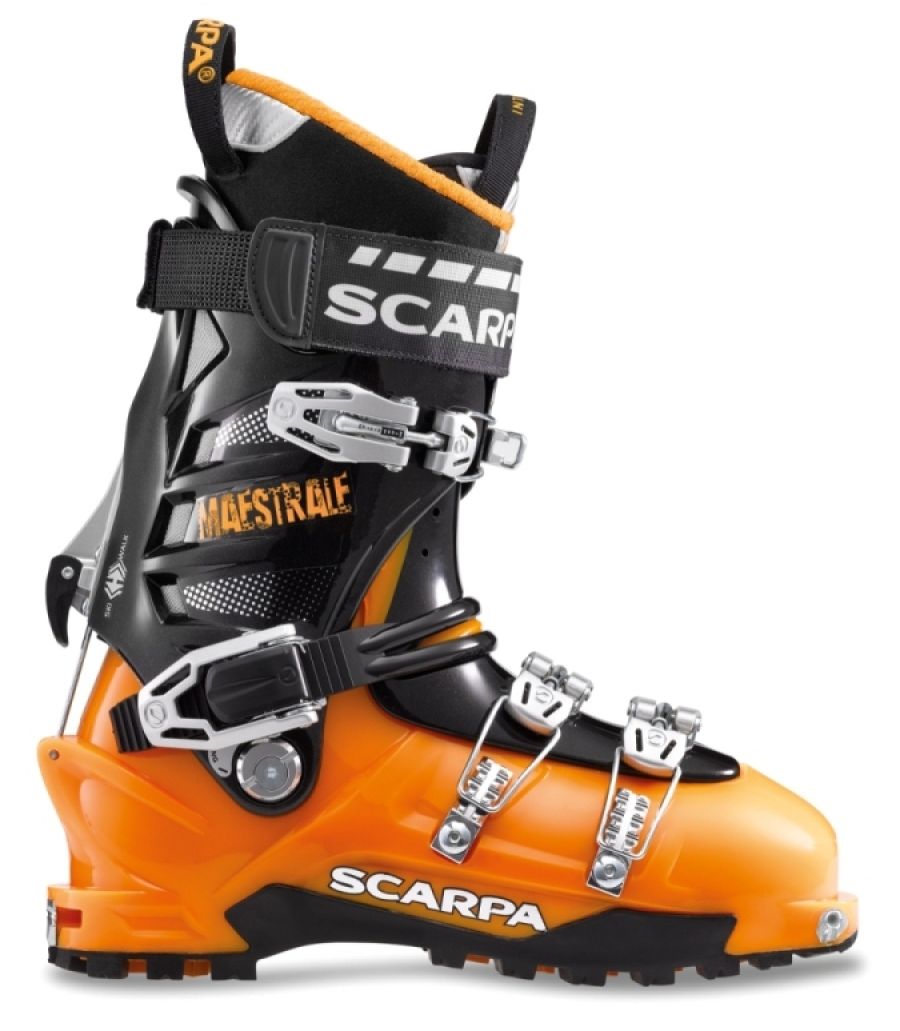 Over the past few years there has been an explosion of All Terrain and Ski Touring boots on to the market. This is partly due to wider rockered skis allowing easier access to the back country and, more importantly for many skiers, the slack country (in resort off-piste). Modern materials and injection moulding techniques have also made them lighter, stiffer and closer fitting. Gone are the days of the Salomon SX90 rear entry wellies, although they might have cult status now things have moved on!

Thankfully we don't have Dynafit Tourlites either: they were a feature of our 80's nightmares - teamed with Silvretta bindings and Dynastar Vertical Extreme 180cm skis: I remember having about as much control as Eddie the Eagle!

So, moving on from the 80's (am showing my age now) boots are now pretty amazing. For off-piste skiing boots can be split into All Terrain (heavier but provide more support with a walking sole and might have pin binding lugs) and Ski Touring (lighter but provide less support with walk mode rubber sole, and most will have pin binding lugs). The shape of your foot is a critical factor in choosing a brand and model, it’s also imperative you get custom footbeds and the liners thermo-fitted properly. If you go to shop that knows their stuff they will measure your foot and recommend an appropriate boot style or manufacture. In Europe there are lots to choose from, but the UK is limited, I always recommend Backcountry in Ilkley if you’re up North.

Some words of caution; don't get to hung up on boot flex: downhill race boots are rated at 130 flex - if you skied off-piste in them it would be comparable to driving a Ferrari on an RAC rally stage! I ski in Scarpa Maestrale RS and Dynafit TLT 6 Pro boots. They are both plenty stiff enough for most people’s needs; the first is just beefier and more downhill orientated, the latter more an uphill thoroughbred. As a rule, if you enjoy skinning uphill and would classify yourself as an advanced off-piste skier, then go for a light 3 buckle boot. If you like hooning around or are new to off-piste skiing and ski touring then go for a beefier boot with 3 or 4 buckles. If you looking at lightweight set-ups then its best to get a pin binding and a reasonably uphill orientated ski.

I have split the article into All Terrain Ski Boots designed for a more downhill orientated skier and Ski Touring Boots for a more uphill orientated experience. As with all these products there is a certain amount of cross over and there is no reason why you can’t do long ski tours in a Salomon Quest or hoon downhill in Gulmarg in a Dynafit TLT 6 Pro Carbon as long as they are comfy.

All Terrain Ski Boots are categorized as a stripped downhill boot with walk mode and some sort of sole unit (not necessarily rubber). They tend to be stiffer and provide more downhill support but on the downside are heavy, lack comfort and tend to be awkward to walk in.

Scarpa are one of the leading boot manufacturers in Europe and have developed new AT boots for the 2014 season. The Freedom and Freedom SL are both built around a carbon frame making them lighter. The Freedom has an interchangeable alpine/touring sole and the Scarpa Freedom SL has Dynafit pin fittings and a Vibram sole unit. They should be stiff enough for any aggressive off-piste skier and they do have a good walk mode so you could tour in them if needed. They do a women’s version of both these boots and, as I mentioned earlier, the Maestrale RS is the boot I use day-to-day (can’t fault them), as I prefer to go lighter than the Freedom SL.# 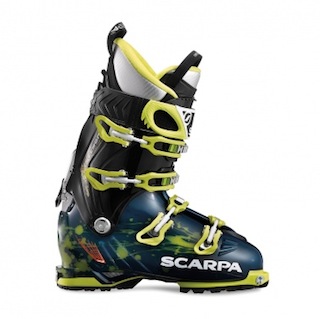 Dynafit have the Vulcan TF and Mercury TF as a replacement for the Titan. The Vulcan TF skis very well and is pretty stiff for a light boot at 1600g. They are easily light enough like the Scarpa Maestrale RS to do full tours in. The only downside to the Vulcan TF is the hefty price tag due to the full carbon rear cuff, which saves the weight and provides stiffness. The Mercury is a good compromise on weight and performance but might not be stiff enough for some aggressive skiers.

Garmont have the Delirium, which is there top end heavy stiff AT boot… I'm not convinced about the colours though! There are still plenty of Endorphin boots around but things have moved on, and they feel rather clompy compared to new generation All Terrain boots. I still rate the Radium and women's Lustre; they are really close fitting boots (you have to have the right shaped foot!) and light enough to do long tours. Only trouble is Garmont have bowed out of the ski boot business so there is only left over stock this year.

Salomon has the Quest range this year, which are colour coded with differing flex ratings. The Quest Max BC is the lighter version of the Quest Max neither are light but they have a alleged flex of 130.  So if you really like taking fifty foot jumps and ski 120mm then these might be the ones for you. I personally find them far too heavy and stiff for my 60kg, the sole unit is also pretty slippery. The lower flex quests range from 120 down to 90 so there is a boot to suit most skiers. 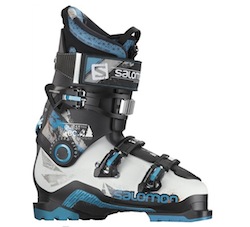 The Factor MX (130 Flex) and women’s Shiva MX (110 Flex) are Black Diamond’s all terrain ski boot offering. They both provide excellent support and could be used for longer tours but are on the heavy side. The BD Quadrant is there one boot does all offering which is light has four buckles but skis very well it also has a proper rubber sole. Lots of other manufacturers are testing the water in this market. These include the Rossignol Alltrack (men’s and women’s version), K2 Pinnacle, Dalbello Lupo and Scott Delirium are but a few. They all look pretty beefy with 130 flex, but are too heavy for long tours even though they have a walk mode. 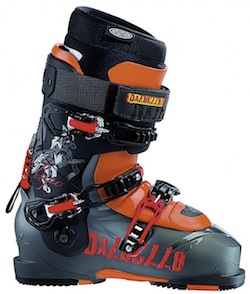 Ski Touring boots are light most have 3 buckles and all have a good high flex walk mode and Vibram style mountaineering sole. A rubber sole and good walk mode is essential for ease of skinning uphill and walking around out of your skis (which you do a lot of when ski touring). Don't underestimate the performance of some of these 'light boots', on the correct feet they can be unstoppable when charging the powder!

Scarpa have developed the Maestrale and women’s Gea; these are hard to beat for downhill performance and weight but make sure you super glue all the bolts tight as they have a habit of shaking loose. If you want a stiffer model go for the RS version, which uses a stiffer plastic cuff but is essentially of the same mould. The Rush and Blink are a softer lighter version of the Maestrale, but I found them a bit soft and lifeless. 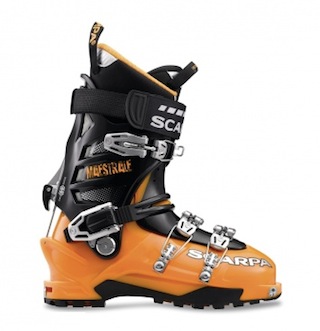 Dynafit have the largest range of lightweight boots - from the Vulcan AT to the new TLT 6 range. The TLT range is hard to beat for uphill performance the new version TLT6 has a slightly wider fit and thicker liner. I love the TLT 6’s performance, and with a carbon cuff they are mega light (1050g) and have removable tongues so skinning up hill is like being in a pair of trainers (although they aren't cheap due to the all the carbon used in them). The standard TLT 6 Mountains ski really well if you want more of a progressive flex.. so if you’re serious about uphill these are the boots! Dynafit have the One PX and U-MF too: these are great if you want more support and have different flexes derived from differing composite plastics used in the boot.  Dynafit also have women's versions of all these boots.

Black Diamond have got the Black Diamond Prime (Swift is the women's version) and Slant. The prime is reasonably supportive boot, not the lightest but an all rounder. I find the BD boots have too much volume for me though. The Slant is a stiffer version which falls in between the BD Prime and BD Quadrant. They both have good flex in walk mode and excellent Vibram soles.

Garmont have bowed out of the ski touring boot market, but Scott have bought their moulds and are now branding the Cosmos, Orbit and Radium. Dalbello have still have two versions of the Sherpa touring boot but I have never seen a pair in the UK!

Whichever boot you choose, do take your time getting them fitted and wear them in before turning up on a ski tour and turning your feet into hamburger. Any of these boots will be better than my old moded Scarpa F1 race boots… so you can still say “light is right” (sometimes...)!