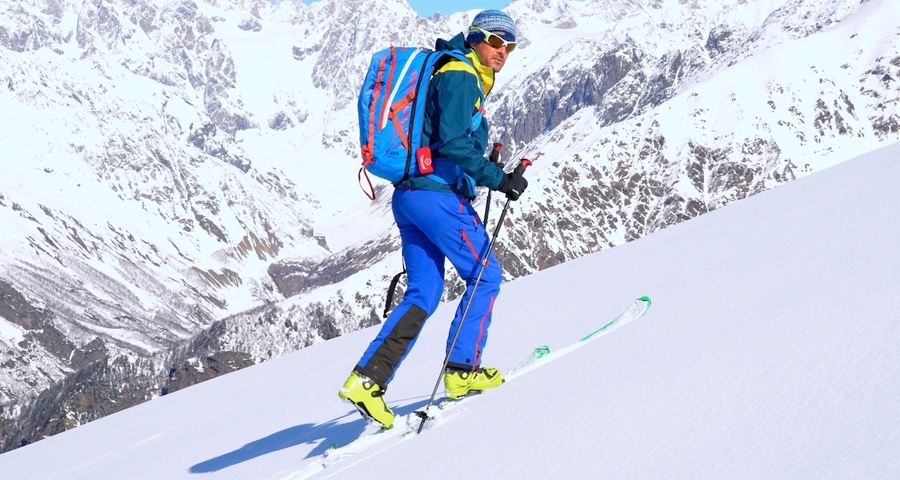 It’s easy to get caught up in studying all the latest trends with skis, AT boots and bindings but overlook an equally important part of the ski touring experience: climbing skins.

Let’s begin with a brief bit of history… Indeed, way back in the 1930s the forerunners of today’s climbing skins were made from seal hides. In France they’re in fact still referred to as peau de phoque. Perhaps we should be using a more politically correct term like “anti-slip ski grips”, which would actually be a little more helpful in explaining what they actually do to the layperson or ski touring newbie. Ski touring climbing skins are manufactured from fibres such that, when attached to the underside/base of the ski, they prevent the skis from sliding backwards when the skier is ascending a slope. The fur-like material on the climbing skin is uni-directional, meaning that the fibres are all oriented such that they protrude in one direction — which allows the ski to glide going forwards uphill, but to grip the snow and hold the ski in place against the snow surface when you push backwards to gain momentum and ascend. Without skins any attempt to climb upwards on a snow slope is incredibly inefficient, as the ski on which you’re pushing off usually slips backwards downhill under the pressure exerted on it.

Fortunately, for today’s ski tourer the rise in popularity of backcountry touring amongst the skiing public has resulted in many new companies entering the market with great innovations. Competition has also brought prices down.Nowadays, climbing skins are predominantly made from two types of material: mohair and synthetic fabric. Mohair skins are made using real Angora goat hair and have the advantage of providing great glide (thereby proving more efficient and saving energy) and being lightweight. However, they tend also to wear out more quickly than cheaper synthetic versions. Generally speaking, 100% mohair skins are mostly used by ski mountaineering competitors looking for the extra speed efficiency the better glide allows for on the ascents.

Synthetic nylon skins represent the bulk of the different models now available on the ski touring equipment market. Whilst synthetic skins are more durable and affordable, and provide good grip when climbing, they tend to be on the heavier side. That said, manufacturers like G3 have in the past few seasons brought out new models that are less bulky, lighter weight and still grip well. It’s also possible to purchase hybrid skins, which typically use a mix of around 70% mohair with 30% synthetic fibre: these aim at bridging the gap between the two main types in terms of glide performance, overall durability and affordability. 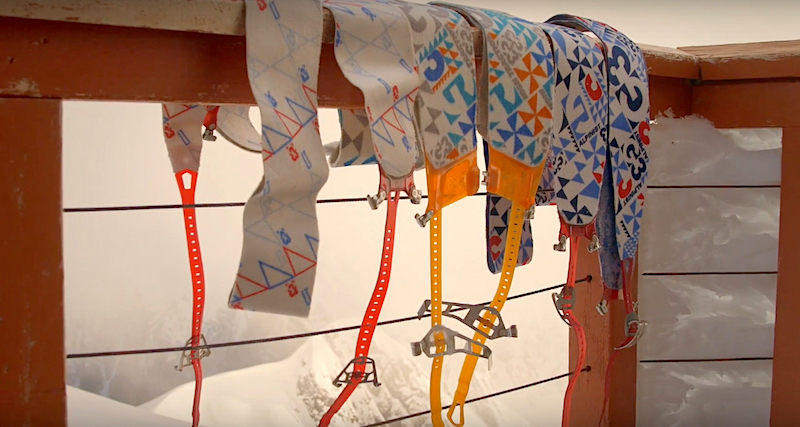 Attaching skins to the ski

Climbing skins have traditionally been attached to the P-tex base of the ski with a special glue and fastened with a securing system at the tip and tail. The fastenings enable the skier to adjust fit and ensure that the skin is correctly placed along the length of the ski to ensure the correct glide and traction on the ascent. A properly sized skin should cover the base of the ski, but not overlap onto the edges (required for edging on the uphill on steep inclines). Climbing skins are usually cut 10-15cm shorter than the length of the ski and are equipped with a fastener that incorporates a tensioner at the rear, which allows for adjustment and a swift fitting/dismount from the ski, ready for the descent.

First off, it’s important to take care of your skins from day to day: when stored at home try to ensure they’re not exposed to dust, dirt and cat/dog hair! Most skins are sold with a lightweight protective bag — use it! You should also have been supplied with a pair of skin savers when purchasing your climbing skins; these are made of a thin plastic mesh cut to a specific length to match your skis, and are designed to maximise the life of the skins by protecting and preserving the glue. These savers should be used both for long-term storage and for daily applications (as a bonus, they also make pulling apart your folding skins without puling a muscle in your arm a lot more achievable!)

Problems with skins - what to look for

Unsticking of the skin — probably most the most annoying and time-wasting issue when out on a ski tour (and very likely to annoy your backcountry buddies when you start to faff about with your gear!). Poorly applied glue, or allowing a layer of snow to be wedged between  the skin and the ski during the process of applying the skin, are very likely to create problems on an ascent. Unstuck skins will result in a loss of control, slippage and slow you down. On more challenging, steeper ascents the lack of traction is also disconcerting and can be dangerous. On many occasions this problem can be solved by simply cleaning the base of snow and carefully reapplying the skin to the base. Keeping the skins warm by storing them close to the body can also improve the tackiness of the glue. As a secondary measure, you can also try applying a spray glue (if you have it to hand), or use a length of duct tape or a strap to improve the fastening of the skin where it’s secured at the tip and tail.

Build-up of snow — despite your best efforts at applying the climbing skin correctly, it’s still possible that snow can find its way under the skin and stick to the base, eventually forming lumps they inhibit the adhesion of the skin to the ski. Snowy lumps and ice under the ski also increase the weight of your set-up and reduce the glide of the skin. You can reduce the likelihood of snow build-up by applying a rubbing ski wax or dedicated product to the base to maximise the adherence of the skin to the P-tex.

Rips and tears in the skin — skins are relatively fragile and need to be cared for! Be careful when touring amongst rocks or sharp objects that may damage the skin if you happen to glide over an abrasive or sharp surface. Look ahead when skinning, plan the line you’re taking and avoid damaging your skins!

Glue deposits — you may find that after removing the skins you’re left with glue deposits on the bases: these can be a little irritating when descending as they’ll add friction and inhibit the natural running of the ski on the decent. Sticky patches can also pick up dirt. Such deposits on the ski base are an early sign that the glue is ageing and a new application is needed. 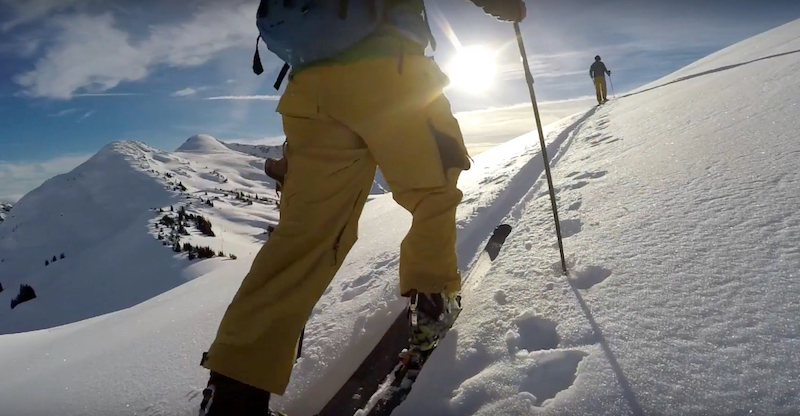 As already mentioned, to get the most out of your skins and to extend their life you need to take good care of them. First off — don’t just leave your skins stuck to your skis: the very lazy option! This will both ruin the ski bases and result in the skin glue quickly deteriorating. Don’t stick your skins directly together either: instead, use the skin savers as directed by the manufacturer and fold each skin half lengthwise with the mesh backing sheet between the sticky sides.

When drying your skins, whether you’re in a mountain hut, snow camping or at home/the lodge, avoid exposing them to intense heat sources (avoid, for example, placing them nearby fireplaces, radiators or leaving them in strong direct sunlight). Once you’ve dried your skins, make sure you keep them in the storage bag supplied with the equipment, or otherwise in a plastic bag (this will minimise exposure to the air, which degrades the glue). A designated stuff sack is the better option as it’s easier to removed the glued skins from and will better prevent shaped skins from picking up dirt. Climbing skins should be stored at room temperature.