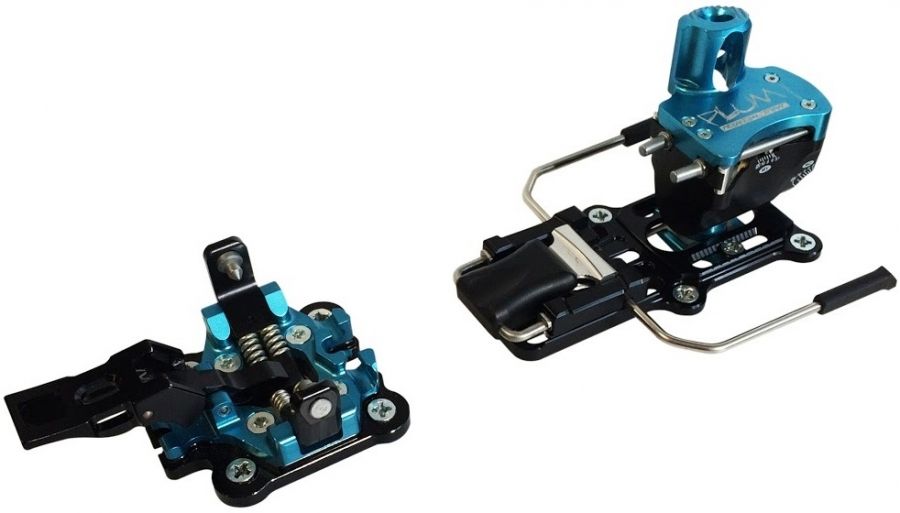 At Mountain Tracks we are bombarded with questions on ski touring equipment. As the UK's leading guided ski adventure company I felt it was about time we dispelled a few myths. Gone are the days where cables would attach your boot to the ski (unless you're a telemarker). Modern ski bindings need to be light and strong enough to cope with driving large skis and stiff boots at high speed.

Boot fit, weight and flex improvements now transmit forces more directly to modern bindings. Downhill bindings are amazing at transmitting that direct force but in the context of this article, bindings with a touring mode are considered. Unless you are a FIS rated downhill skier or a 'snow park' specialist then most modern touring bindings will do everything. If you want to stick with downhill bindings the BCA still make the 'Alpine Trekker' that converts your setup to a touring binding. They are rather fiddly to get used to, so expect cold fingers and your patience levels tested on any steep kick turns.

Most bindings fall into two categories, those that use the Dynafit-style pin attachments and those using more conventional step in binding styles. Both styles have there pro's and con's of which I'll outline below. The major factors in choosing a touring binding are strength, weight, ease of use and flex. The more conventional step-in ski touring bindings include brands like Marker, Diamir and Silveretta. I'll exclude the Silveretta straight away as they are not readily available in the UK. These touring bindings also have some other quality and flex issues of which we'll touch upon later.
In the step-in ski touring binding category we really have two market leaders: Diamir and Marker.

The Diamir range of bindings include the Explore and the Freeride Pro. They both work like a conventional binding with DIN settings at the front and rear. The latest Eagle has been split into Din 10 and 12 for more aggressive, heavier skiers. To be honest, most people who want this function would probably go for the Freeride Pro as they come with Din 12 as standard. The binding release mechanism is similar to a downhill binding but will cope with a Vibram soled ski touring boot. In 'rolling deflection' tests they compare favorably to mid-range downhill binding. Wildsnow.com carried out test on how much ski touring bindings flexed laterally (rolling deflection) which highlighted some big differences between the main styles).

Both models come with brakes to fit different widths of ski. Don't get leashes as they are a complete pain, brakes are fine! The Explore weighs in at about 1950g and the Freeride Pro is the Explore on steroids, so weighs a little extra. They both have a very easy-to-use 4 postion heel raiser and can be turned from downhill to ski touring mode without taking your foot out. Diamir bindings are very simple to use, have an efficient skinning action and are reasonably lightweight. The ski crampons are easy to fit and changing the heel from uphill to downhill with a pole is a piece of cake. Kick turning is pretty straightforward when you master the heel kick. Spares are readily available in most alpine huts. The drawbacks are what you gain in ease-of-use you also gain in weight! When the bindings have been used a lot, play develops in the plastic locking mechanism which can lead to greater binding flex. I have seen a number of bindings break when in skinning mode when people have fallen forward, twisted and sheared off the binding at the toe piece, so take care on undulating tracks or skiing down short hills with skins on.

Marker is synonymous with downhill racing and is only a recent player in the ski touring market. Never the less they have gained a market share rapidly with their more freeride orientated touring bindings. The Marker Duke and Barron are essentially the same, with Duke having a higher DIN setting. Both these bindings ski very well and compared favourably to a top end downhill binding in the 'rolling deflection' test.

They are both compatible with alpine and touring boots. You need to be over 70kg for the Dukes and both bindings are designed for a minimum ski width of 80mm underfoot. They work very well on big wide skis. The uphill to downhill mode is rather fiddly and you have to take your boot out to covert from one to another. The heel raisers are fiddly and only have two settings. Ski crampons again are available but rather fiddly to attach. The big drawback with these ski bindings is the weight. They are a hefty 2900g! So if you have a big ski as well you'll need legs like Body Miller to survive the day. These bindings are great for hooning around and the occasional uphill sortie but are far too heavy for serious ski touring users. To address this Marker have bought out the F12 (for heavier more aggressive skiers) and F10 to compete with the Diamir bindings. 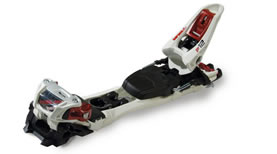 They weigh roughly the same as the Diamir binding, but again have the same inherent problems as the Duke and Baron; you have to remove your foot from the ski to convert from uphill to downhill mode. The advantage with these touring bindings is the solid feeling when skiing in them; they have less flex than the Diamir. All the Marker bindings have a traditional toe and heel DIN release setting and will cope with Vibram soled ski touring boots.

In conclusion the Dukes and Barons are far to heavy for serious ski touring. The F10 and F12 are fine but be prepared for some fiddly transitions and cold fingers with ski crampons. I have seen some of these bindings break as there's a lot of plastic on them. The locking mechanism can also be a pain when iced up as the locking rails clog and cause people to half engage them... so when they put the first downhill turn in - boom!  The rail brakes. Thoroughly check that you have done a proper job of engaging before setting off down that 45 degree couloir.

This brings me to the Dynafit style binding and my favorite subject: shaving weight off my ski kit!

I have been using these bindings since the early 90's and am a complete covert. Last year I binned my downhill boots and all conventional bindings on my skis. The Dynafit binding uses the boot as the pivot platform. Holes at the front and back of the boot attach to pins on the binding. The principal is very simple, strong and effective but you do need Dynafit compatible boots. Over the last few years there has been an explosion of these on the market from beefy freeride boots (not far off downhill boot performance) to super light carbon hybrid boots at 800g. I refer to Dynafit-type bindings as there are lots of other manufacturers who have muscled in since Dynafit lost it's patent. These include Onyx, ATK, Plum and Crazy Idea, who have all been developing their 'Ski Randonnée' race technology to get the strongest, lightest bindings on the market. All these bindings have lateral and forward DIN release but release from the heel piece only. This could be an issue if you fall over a lot... apparently!

To be honest I have never had a problem with bindings not releasing or seen many clients with issues. The Onyx binding is very similar to the Dynafit but I'd personally avoid it, having more plastic than a Taiwanese toy factory. The original Dynafit is hard to improve on as it's worked for many years. I occasionally see some MK1's around which must be at least 20 years old! The great advantage with these bindings are weight and strength. The heaviest binding in the range is 1060g compared to a Diamir Explore at 1800g. I have never seen one brake although there have been issues with them pulling out of fat skis (over 100mm underfoot) but Dynafit have addressed this with some freeride orientated bindings with wider base plates. They take a bit of getting used to but once converted there will be no turning back.

The Dynafit Radical ST binding is the most main stream and user friendly of the Dynafit range. The Radical ST still needs Dynafit compatible boots but it does have ski brakes, easy step in and easy climbing height adjustment. The TLT Radical STs are aimed at those who split their time equally between piste and touring. All the Dynafit bindings performed really well in the 'rolling deflection' test and were similar to the Marker Dukes (solid). Personally I think the only limiting factor for these bindings is the boot and person it's attached too. The TLT Speed is Dynafit's purist binding. It is strong, functional but minimalist. There are no ski brakes available so the bindings must be used with leashes (I use a G3 tele leash with plastic clip and and keyring on my boot toe). Ski crampons are available as an optional extra for all Dynafit's. These weigh in at 380g which is a serious saving when doing long hut to hut ski tours. If you're serious about saving even more weight I've just received some of the Dynafit TLT Speed Superlites at 180g with DIN settings; coupled with their TLT 5 boot and a light touring ski you are pushing less than 2kg on each leg! 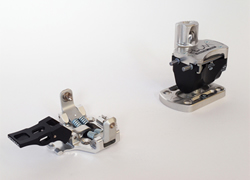 The Plum (a French company based in Sallanches, just down the valley from Chamonix) Guide is a high quality ski touring binding. Plum have taken the standard Dynafit TLT design, improved several of its features and produced the binding out of only the highest quality steel, CNC aluminium and plastic available. The result is a beautiful and functional touring binding. Improved features are the front lever, crampon attachment and the heel post. The front lever is longer, metal and a much better shape on the Guides, the crampon slot is all metal and much stronger than the Dynafit and the heel post has a better design of slots which make it easier to insert your pole and twist from any of the positions. The Guide binding is compatible with Dynafit ski crampons and weighs about the same as the comparable Dynafit one. A braked version is due out this year. ATK is an Italian brand who have been around in the ' Ski Randonne' race world for years. Their binding is a cross between the Plum Guide and the weight-saving Dynafit TLT Speed Superlite. It is exquisitely machined and only weighs 170g. For another 100g you can also fit brakes but if you're saving weight the brakes seem to be rather pointless.

If you're serious about ski touring and backcountry skiing then pin bindings are the way forward. They don't release conventionally, can ice up under the toe plate and in the boot pin holes. This is a small price to pay for strength, serious weight savings and simplicity. I hope this has given all the gear magpies more ideas for open wallet surgery. Remember light is right, unless you're hucking cliffs or pulling 360's in the park. Join the revolution - and see you soon touring or freeriding this year on pin bindings!