A quick trip to the summit of Mont Blanc... by paraglider!

Last Sunday’s weather forecast in Chamonix was for temperatures of 35 deg+ and the 0 deg isotherm to rise to over 4600m! This is a magical forecast for a paraglider pilot and, after spending most of Saturday late afternoon watching around 10 paragliders flying around and landing on the summit of Mont Blanc, Sunday’s goal was set to try to match their exploits!

Flying to the summit of Western Europe’s highest mountain is only really possible on maybe 2 or 3 days every few years. It was first done in the hot summer of 2003 then again in 2008 and on one day last year in 2011 so really very few opportunities exist for all the right circumstances to come together with light winds at altitude and a very high cloud base. Word was out that Sunday’s flying would be big - the main take off in Chamonix at Plan Praz Brevent was packed with people; maybe 150 pilots all waiting for the conditions to get good before they took off. I decided to let a few people go first but to take off before the rush of pilots started, there is nothing worse than being stuck on the ground behind 20 other people when all you want to do is get in the air!

In September 2008 I carried a lightweight paraglider up to the Vallot hut on Mont Blanc and continued to the summit on my feet before descending back to take off in the Col du Domes around 4200m to fly back down to Chamonix. This was a great way to summit Mont Blanc but avoid the long walk down. On Sunday I hoped I could combine enough luck and skill to fly my paraglider up and over the summit itself.

Taking off around 1245 I quickly climbed in the thermal above the lift station before making my way down towards the Aiguillette Les Houches at the far end of the Aiguille Rouge massif. Climbing to around 2900m I had a good view of the pilots who had already started to fly towards Les Houches and onto the side of the Tricot mountain. I could see a group of 4 or 5 gliders all getting a strong climb in a thermal above the Pririon at Les Houches so I headed off on glide to join them. 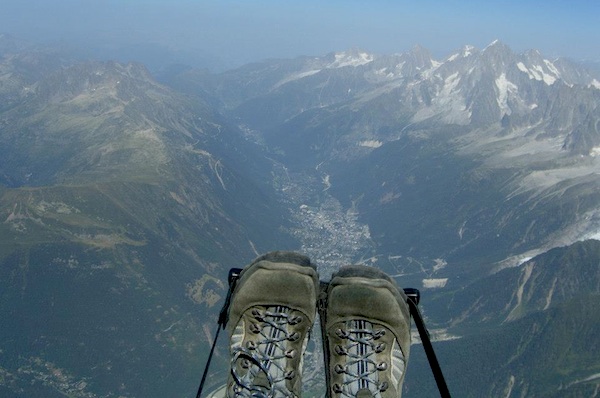 Fortunately as I flew towards them I bumped straight into the strong lift above the top of the mountain and quickly climbed back up to around 2900m. I then turned SW and headed over towards the Col du Tricot to continue my journey upwards and onto the Bionnassay ridge. The terrain here is scary! Steep slopes of rock and scree leading up to the ice and snow of the Bionnassay itself, it took almost all the courage I could muster to keep flying as often you are turning close to the mountain and up and over the ridge looking down into the abyss of the Bionnassay glacier far below. 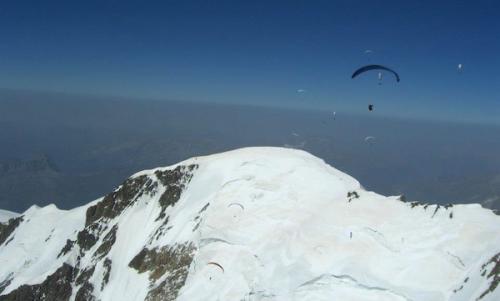 Following the gliders in front of me that show you were the thermal lift is makes it easier and after some time I climbed right up to 4000m breaking one goal I had always set myself. Now up and over the summit of Bionnassay at around 4200m there were plenty of people already soaring the summit of Mont Blanc and landing on the top. The Route to reach the summit here now goes over the international border into Italy, soaring along the West side of the Gouter ridge, passing the Vallot hut and around towards the giant Brouillard Ridge that climbs up from Italy and the Miage Glacier. This felt like the point of no return for me as if you fail to climb high enough the only way out is to fly down to Courmayeur as it would be impossible to get back onto the French side.

Once I met the ridge around the summit of the Mt. Brouillard at just over 4000m I climbed in a really strong thermal, up to 6 metres per second up! This propelled me in a matter of minutes to over 4600m. Suddenly the summit seems close and achievable! Sticking with the really strong lift and avoiding the urge to head for the top too quickly, I continued to climb to a maximum altitude of 4920m. I literally could not believe it and I was so overcome with excitement and emotion and probably the altitude I realised I was almost gasping for breath as well as being really cold now I was so high with over 3hrs of sitting still in my harness. 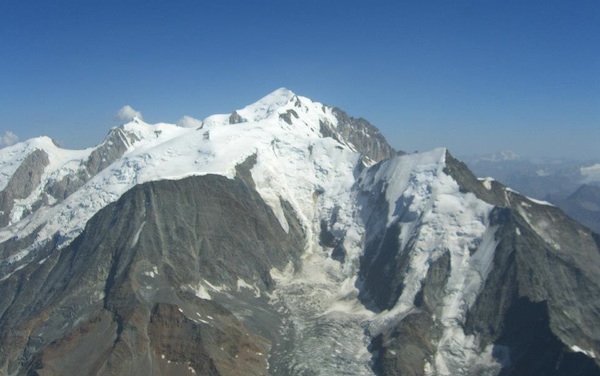 It was time to fly over the summit and grab some photos to record the occasion. The summit ridge was busy with pilots trying to top land and those who have already landed, probably somewhat annoying for any climbers who were still up there in the mid afternoon to have so many people just 'fall out of the sk'” on the summit then take off again to fly down! I was too cold to try to hang around and land and also a bit worried about what could be a difficult take off with no crampons and the ice and snow; so I headed back out following a similar route to my ascent to make sure I avoided the no fly zone around the Mont Blanc, Aiguille du Midi area. Landing back in Chamonix around 1630 I had flown for just short of 4hrs and ascended just short of 3000 vertical meters up and over the summit of Mont Blanc, I was elated, exhausted mentally from the concentration and emotion of it all and couldn’t wait to tell to my friends about it! 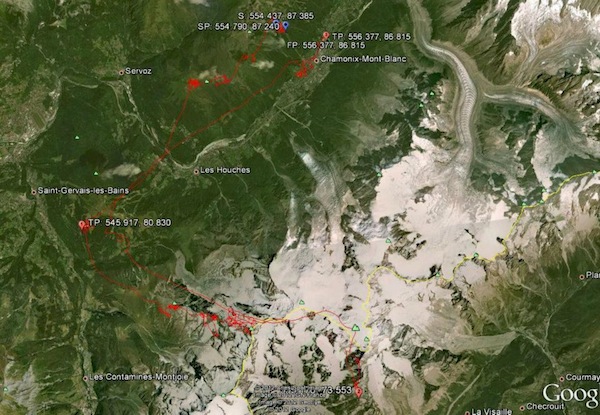