Putting the adventure back into Mont Blanc 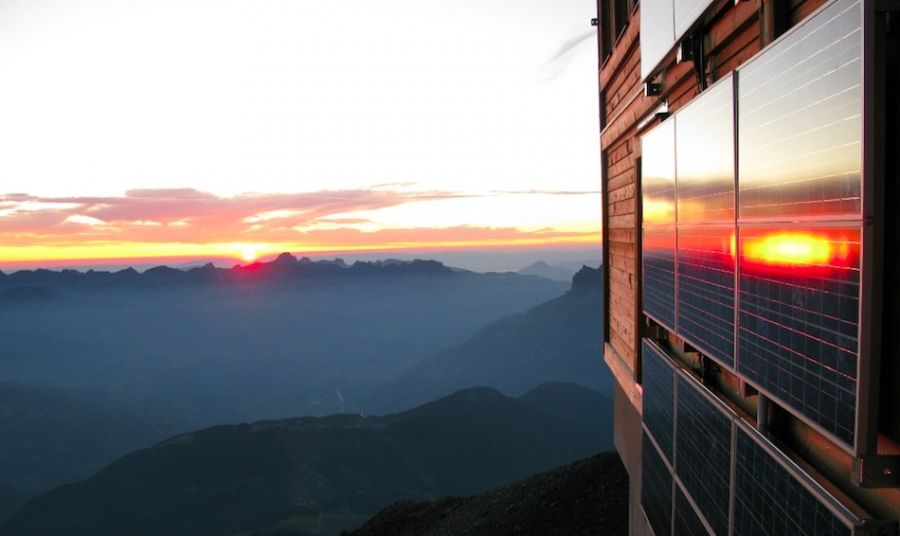 Mont Blanc at 4810m is the highest peak in the European Alps and one of the most popular mountains in the world for alpine climbers. At near Himalayan proportions, this is NOT a mountain to be underestimated. Avalanches, fierce storms, crevasses, rock and ice falls have all claimed many lives. Everyone attempting the peak MUST have prior alpine climbing experience. It is essential to understand, recognise and have the necessary alpine skills to safely navigate these hazards.

Mont Blanc’s popularity has always attracted tourists - Chamonix and Courmayeur are today large bustling towns built off the back of being under the famous peak. The Aiguille du Midi is one of Frances’s most successful tourist attractions. Access onto Mont Blanc is a doddle, the pressure to reach the summit is enormous. There are often not enough beds in the huts for the number of people looking to climb. Inevitably this leads to climbers pushing the safety envelope. Mont Blanc is NOT a beginner’s peak. That accepted, it remains a wonderful mountain but it’s worth remembering there are 81 other 4000m peaks in the Alps, not to mention the hundreds of sub 4000m peaks. 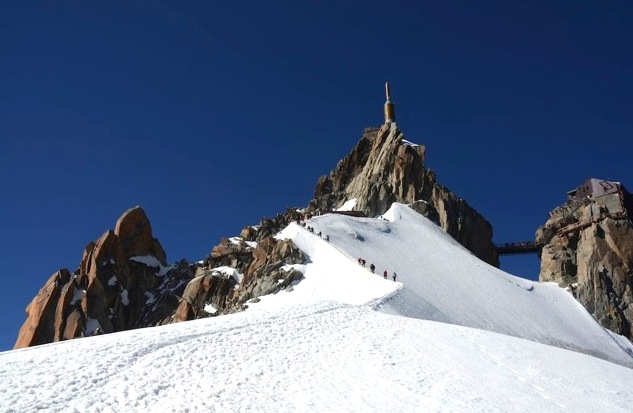 Okay, you have served your apprenticeship and you want to climb Mont Blanc: this article looks in details at the most popular route options. There are several classic ‘Voie Normale’ climbing routes to the summit of Mont Blanc. I have outlined the three best-known climbs, each has its own merits and challenges. Which one you ultimately choose will depend on the time of the season, current conditions and predicted weather and most importantly which refuge has space.

The normal itinerary on the French side and the most popular route.

The adventure here begins tamely with a ride on the Tramway du Mont Blanc (TMB) which is taken to the Nid d'Aigle (2372m). The cog railway actually starts in St Gervais Le Fayet, though climbers coming from Chamonix meet the tram at the top of the Belleview cable car from Les Houches. The ascent then begins in the direction of the Refuge de Tête Rousse(3167m). From the Nid D’Aigle the hut approach is a straightforward 800m/2.5-3 hour climb following a rocky path with short exposed sections.

For 2012/13, due to renovation work on the final section of the TMB, the tram terminates at a temporary halt at Mont Lachat. This means would-be summiteers currently have a choice of commencing their ascent either from the timeless village of Bionassay and walking up through beautiful larch woods (longer). Or taking the tram as high as possible and following the old pathway up the side of Mont Lachat. This route, being little frequented in recent years, has some loose rock and facing north often holds snow early season. Although not technically difficult, wearing helmets, roped up moving together and possibly crampons are all advisable on the steeper sections.

Beyond the Tête Rousse there is a short straightforward section of snow to cross before reaching what can sometimes be the crux of the whole climb - crossing the Grand Couloir. This 600m high and 100m wide gully takes only 30 seconds to cross but during that time you closely resemble a pin in a bowling ally. In snowy or icy conditions you have little to worry about but late in the season or in dry conditions and especially in the afternoon rocks melt out of the couloir and ricochet their way down. Not a place to hang around. Seek advise on current conditions before embarking on this section and always wear a helmet.

Having safely negotiated the couloir, the route scrambles up the steep rocky ground on its right side. Worn down by countless passersby there is little loose rock here and the local guides have bolted cable lines to help safeguard the steeper sections. However there is often snow and ice on the ground, especially early or late in the season and many elect to wear their crampons. 2-2.5 hours later you emerge on the balcony of the Refuge du Goûter 3817m.

Pre-dawn alpine starts are all the rage at the Refuge du Goûter. Traditionally you attempt to eat breakfast at 1am and stagger out of the hut, still in sleep mode at 2am. This is to time your arrival on the summit of Mont Blanc shortly after sunrise and on your descent re-cross the Grand Couloir before the afternoon rockfalls. Following the shimmering string of headlamps, the route, from now on over snow and ice, leads across the Dôme du Goûter to the Vallot shelter. This is not a place to linger for too long but a welcome shelter when windy and reached at a more civilised time to consume breakfast. Finally the route meanders up the airy L'Arête des Bosses to the summit of Mont Blanc itself. The summit ridge is spectacular with great vistas opening up in all directions. 4-5 hours from the Refuge du Goûter. 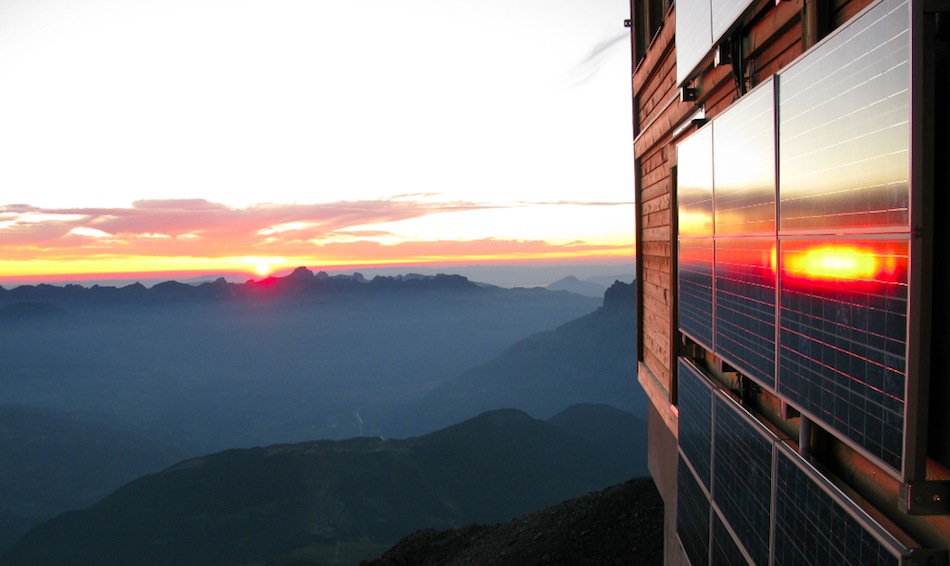 This route has less overall height to be gained but with more up and down and a steeper technical section than anything on the Voie Royale.

Starting from Chamonix, the extraordinary engineering feat that is the Téléphérique de l'Aiguille du Midi constructed over 50 years ago, whisks you to 3842m. From there, although only a 1000m below the height of Mont Blanc, two other 4000m alpine giants stand in your way between you and your summit prize.

First you have to brave the narrow snowy ridge that drops you 300m to the Col du Midi. You reclaim the lost height as you ascend to the shoulder of Mont Blanc du Tacul. Next is the climb to the shoulder of Mont Maudit and the crux of this route, a 75m, 50 degree snow slope above the bergschrund. Expect great exposure and exploding calf muscles as you front point your way up. Major difficulties over you complete the crossing of Mont Maudit’s slopes and move onto the final, never ending, grind up moderately angled slopes to the summit of Mont Blanc. 6-7 hours from the Aiguiile du Midi, 12-14, hours for the round trip.

Would be summiteers choosing this route have two options. The first is to start their attempt at the crack of dawn via the ‘alpinists’ cable car to the Aiguille du Midi. On return from the summit stay the night at Les Cosmiques refuge on the Col du Midi before re-climbing the Aiguille du Midi ridge and descending to the valley in the cable car. Or the second option is to reach the hut the day before, snatch a few hours rest before a classic 2am start and make it back to the Midi before the cable car closes for the night.

This route is also known as the normal Italian itinerary.

A route for purists as there is no help from mechanical lifts. This route is also much quieter and wilder than its French counterpart the Voie Royale. Best attempted in early season when the snow bridges of the heavily crevassed Aiguilles Grises glacier are more safely navigated.

The round trip here takes 3 days. Day 1 to the hut, Day 2 from the hut to the summit and back to the hut and day 3 from the hut back to the valley. The route lost its popularity for many years due to the poor state of the hut, however since the hut has recently been rebuilt to a good standard, this route deserves more attention.

The hike to the refuge starts at the parking lot of La Visaille 1670m, in the stunning Val Veny. First, follow the track towards Plan Combal, not far away lies the lake Miage. Meadows of alpine flowers give way to the lateral moraines of the enormous Miage Glacier which is followed gently upwards for 6km before an exciting Via feratta leads to the new Rifugio Franseca Gonella 3071m. The next day the route proceeds through the Col des Aiguilles Grises and then over the Dôme du Goûter, concluding at L'arête des Bosses, as per the normal French route. If the condition of the Aiguilles Grises glacier is poor it is possible to follow the much longer Aiguilles Grises ridge directly from the hut to reach the Dôme du Goûter. 6-7 hours up, and 12-14 hours for a round trip. For me, more than any of the other ‘voie normales’, this route puts the adventure back into climbing Mont Blanc! 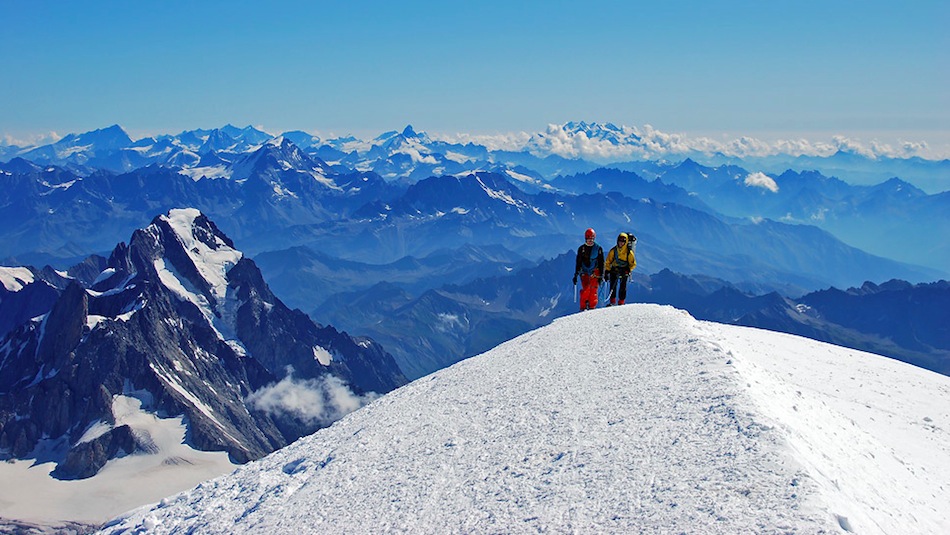