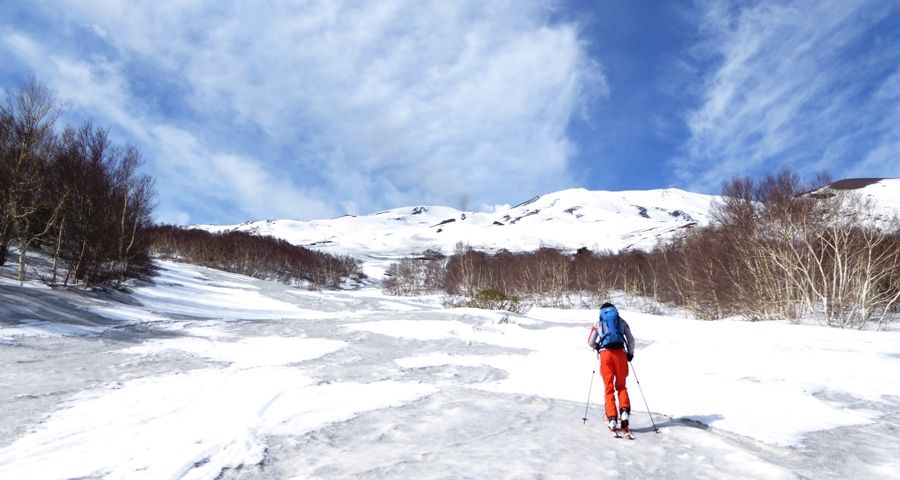 NEW for 2018 Skiing; Mount Etna, the highest active volcano at (currently 3,329m) and largest (20km radius) in Europe, with fantastic views to the Mediterranean and Ionian Sea, is an experience that will endure in your memories.

Sicily is rich in history and home to Doric-style Greek temples, Byzantine mosaics at the Cappella Palatina and a former royal chapel in Palermo. However, invariably overlooked is its charm as an sensational destination for rather enigmatic ski touring on volcanoes nestled above Mediterranean shores! Prepare to be overwhelmed by just how varied and diverse are the many features that Sicilian life embraces, shaped by its distinctive landscape, culture, cuisine and people.

An eternal crossroads of civilisations, the gorgeous island of Sicilia, as it is know to Italians, seduces adventurous travellers with the dazzling diversity of its landscape. The rugged Sicilian shoreline and sparkling blue-green waters contrast starkly with the pure white of the snowfields high above on the slopes of the island's volcanoes. To get to the snow line you'll need to climb first through a changing landscape of yellow broom bush and wild caper plants, before eventually meeting the lower slopes of black volcanic rock. Looking back toward the coast reveals fantastic vistas of the sea: the two opposing views presenting a perspective unlike any other you'll observe elsewhere. Sicily really is an amazing land of contrasts, with panoramas that often border upon the surreal — smoking, smouldering craters surrounded by wide open snowfields, framed by a slowly setting sun that edges its way gently into the Mediterranean on a spring evening. Where else in the world can possibly compare to this enchanting island with such a fascinating past?

While seeing is believing, in Sicily it's equally the case, of course, that tasting is to truly experience this exceptional destination. The sublime local cuisine is an essential feature of Sicilian life. In fact, for many visiting Sicily the food, considered some of the best in Europe, is reason enough to return year after year! From arancini to cannoli, Sicilian dishes are known the world over; with influences from Arabia, Africa, Iberia and, of course, mainland Italy, the fusion of flavours that form in the island's cuisine are truly remarkable. Aside from the cultural influences that have transformed Sicilian cuisine over two millennia, Sicily's fantastic climate has also played a major part in shaping the local practices of the island's farming communities and their tilling of its fertile soils. The lush fields and orchards produce bumper crops of olives, tomatoes, citrus fruits, pistachios, grapes (including those of the wine making variety!) and almonds... That not to mention of course all the delightful seafood that's fished and landed in local ports from the island's coastal waters. The result? A cuisine that’s always very fresh, diverse, and utterly delicious! By good fortune the IFMGA guide, Gianni Dorigo, that leads the Mount Etna ski tour has handily identified the best of the restaurants to enjoy during the trip, ensuring you'll enjoy the quintessentially warm and exuberant hospitality of the isle while savouring the finest Sicilian cooking.In early spring, the climate of Etna National Park generally provides good compact snow conditions and, if we're lucky, chance to ski a little powder too, on occasion.

There's nothing quite like linking flowing turns through fresh snowfields with sweeping vistas of the Mediterranean! In just four days the Mount Etna trip combines many contrasting experiences and provides a fantastic insight on many levels to the special life of Sicilians. Adding ski touring to the mix certainly makes for a rather quixotic adventure: skiing one of the most active volcanoes on Earth and the centrepiece of Sicily’s largest national park — Mount Etna — clearly isn't your everyday exploit (making for some rather unique bragging rights upon your return!). Join us then on the Mount Etna ski tour and prepare yourself for a sun-drenched, flavour-filled, extraordinary ski journey quite unlike any excursion you've ventured on before!