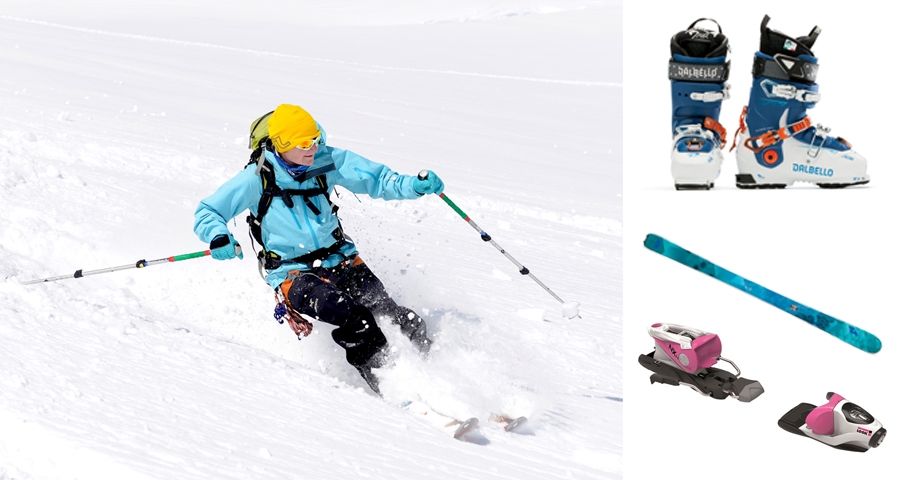 Women’s Skis
It used to be the case that many manufacturers thought they could get away with simply creating a women’s ski by shortening the length of the men’s model, softening the flex and then adding a pretty pink and purple graphic on the topsheet : thankfully those days are well and truly over! Fortunately, in the past decade manufacturers have cottoned on to the fact that women demand skis that perform just as well as those of their male counterparts. Since the mid 2000’s both the North America and European ski companies have upped the ante; researching, testing and developing high-end skis that meet the needs of female skiers at all levels. A key element of the change in approach has been the recognition that women’s physiologies are different, such that a woman’s ski needs to factor in important considerations such as the relevant leg to torso length ratio, the size of the upper body relative to the lower body, and other bio-mechanical aspects that differentiate the female skier from the male. Today, women’s skis are every bit the match of those designed for men and, backed by professional freeride skiers such as Angel Collinson and Lindsay Rider putting in the R&D hours, the skis on offer just keep getting better with every winter season.

Anatomical/physiological Differences - Women’s torsos constitute a greater overall length of their total body length relative to men. In addition, the upper part of the leg is commonly a greater part of the total length of the leg for a woman. The aforementioned differences result in a considerably different pattern of flexion and movement of the centre of gravity for women, such that at a  female skier flexing forward in her ski boots has a greater possibility of shifting bodyweight back over the rear of the skis. This consideration has a major impact therefore on the design of women’s skis: the prospect of the unweighting of the ski tips caused by a shift in position needs to be factored in when creating a ski that can properly initiate and engage in turning, and also counter any tendency for the ski to drift or feel unstable. A further consideration in relation to physiology in designing a women’s specific ski is pelvic width. Relative to total body height, a woman’s pelvic width is generally greater. This difference influences how ski designers calculate the necessary sidecut of the ski, taking into account how a female skier’s centre of gravity changes through the course of initiating and following through carved turn. Ski design needs therefore to consider how the shape of the ski, in combination with the flex pattern, will effect control and stability and minimise the risk of over rotation of the hips that can produce an uncontrolled skid, as opposed to a balanced, controlled carve.

Ski flex and mounting position - The flex pattern is a critical element of ski design and function. A women’s specific ski needs to take into consideration differences in physiology that influence the positioning of the binding. Women’s skis require a mounting position that is different from that of men’s skis. Crucially, a women’s ski is designed such that the mounting position is shifted slightly forward; this counters the tendency of the skier’s weight to shift toward the tails when a turn is instituted. The resulting effect of shifting the mounting position slightly towards the tips is that it assists the skier in directing the energy driven through the skis such that power is more effectively transferred toward the skis’ tips, thereby aiding stability and reducing the level of exertion required to initiate the skier’s turn. It should be noted that manufacturers most often experiment with flex patterns and mounting positions together whilst also taking into account how these two elements of the ski work in conjunction with the skier’s technical ability. Often designers will implement more radical modifications to compensate and correct for challenges beginner skiers will face while learning good ski technique. In contrast, more advanced women skiers can better exploit the performance of expert skis that are stiffer and less stable, yet allow for faster transitions from edge to edge and can better handle the higher levels of energy transmitted through them.

Women’s Ski Boots
Whilst women’s ski boots have been available for a far longer period of time than gender-specific skis, they’ve also benefitted considerably in recent times from the greater level of addition and resources manufacturers have invested in developing better fitting models for female skiers. Again, as with skis, designers need to take into account several different aspects of the differences in physiologies between women and men when developing appropriate women-specific boots. A critical consideration in this respect is the difference between the proportions of the lower body, with women’s upper legs typically constituting a greater proportion of the overall leg length. The difference in the ratio between the two is such that the calf muscle’s position relative to that of the overall leg length is appreciably different from that of a man’s physiology. As such, a woman’s boot needs to incorporate a cuff that ensures the boot doesn’t create discomfort for the wearer by pinching or squeezing the calf muscle: a very painful occurrence even for the shortest of durations! Furthermore, calf discomfort is also a critical factor in the development of more general lower leg pain in the skier, and for restricting blood flow — a primary cause of sore, cold feet! 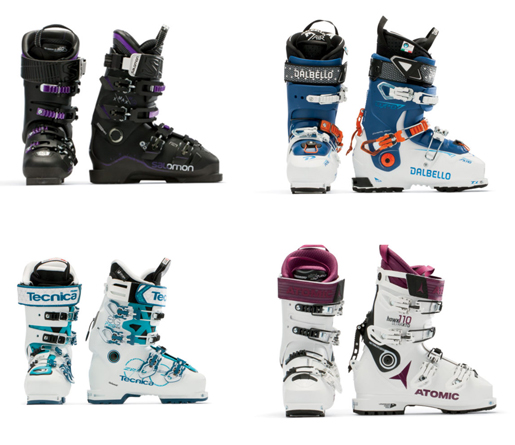 Boot height - Women’s ski boots are designed such that the overall height of the cuff is reduced; this significantly limits the loss of leverage that would result were a shorter leg combined with a longer boot length. In addition, a shorter boot allows for greater efficiency when adopting a position that allows the female skier to correctly weight the ski and maintain a stable stance while also reducing the amount of energy expended to do so. The more effective positioning that results from the necessary adjustments to boot height also improve circulation and assist in keeping the feet warm and comfortable: obviously a necessity for enjoying long ski days!

Foot width, length and taper - Ski boot designers also need to take account of differences in relation to the size and shape of feet. Women typically have narrower feet in proportion to the length, and in general have a foot that tapers more immediately toward the heel. These differences are such that a ski boot designed for women usually requires a profile that, for a certain width, incorporates a narrower shape in conjunction with a slimmer heel pocket. In the past, before women were specifically catered for (for example, in the era where gender-specific ski touring boots were non-existent), women using men’s boots would find their feet shifting from side to side as a result of movement inside the boot: resulting in far less control than is necessary to edge the ski effectively, and also producing a great deal of fatigue and discomfort!

Boots – shape and flex  - The overall shape, or last, of the boot is another key aspect that influences both performance and comfort in a boot designed for women. Thankfully women’s-specific boot models today are usually available in a variety of different widths and feature a proportionate volume that allows for a proper fit that maximises heel retention and a snug, secure feel for the foot within the ski boot. Proper fit is, of course, essential in delivering control to the ski in an efficient and comfortable manner, allowing for the skier to predictably transfer energy to the ski in different terrain and slow conditions. As is the case with skis, designers take into account the different levels of prowess skiers exhibit depending upon their level of experience, and adjust the pattern of flex of the ski boot accordingly. It’s therefore important when choosing a boot to be honest with yourself in assessing your own level of performance! If you’ve the opportunity, it’s a good idea to try different models on the slopes to see just how differently boots can feel and perform given certain snow conditions.

Women’s bindings
Women’s bindings are developed such that they provide the optimal compromise relative to performance, safety, comfort and the overall weight of the binding unit. In addition, women’s bindings usually feature a heel piece that lifts the boot heel slightly higher than that of a man’s foot in the equivalent binding model. This difference factors in the need to slightly shift forward a women’s centre of gravity to ensure optimum body positioning over the ski, and will also therefore result in a safer binding — correct functioning of the release mechanism is partly dependent on how the binding is loaded in relation to the pressures exerted on it. As women’s skis are commonly different widths from similar models developed for men, an initial consideration is ski brake width. Fortunately, almost all models now allow selection of a wide variety of brake widths to take account for the different sized waist widths of the many skis on the market for women. With women-specific units a major consideration is the range of the binding unit’s release settings. The binding’s ability to release at the right moment and protect the skier is of course the most critical element of its function. Therefore its imperative when selecting a unit to take into account both one’s skiing ability and body weight; these considerations are just two key elements to correctly choosing a binding with the right DIN range. Women skiers will also need to factor in height and boot sole length. The DIN (shorthand for Deutsche Industrie Norm), relates to a set of German standards long used in the ski industry to denote the range of adjustment in release for settings available in a specified binding model.