Via Ferrata – Trekking with a Twist!

Written by Olly Allen
17th October 2016
Via Ferrata, hiking in the Dolomites, Via Ferrate 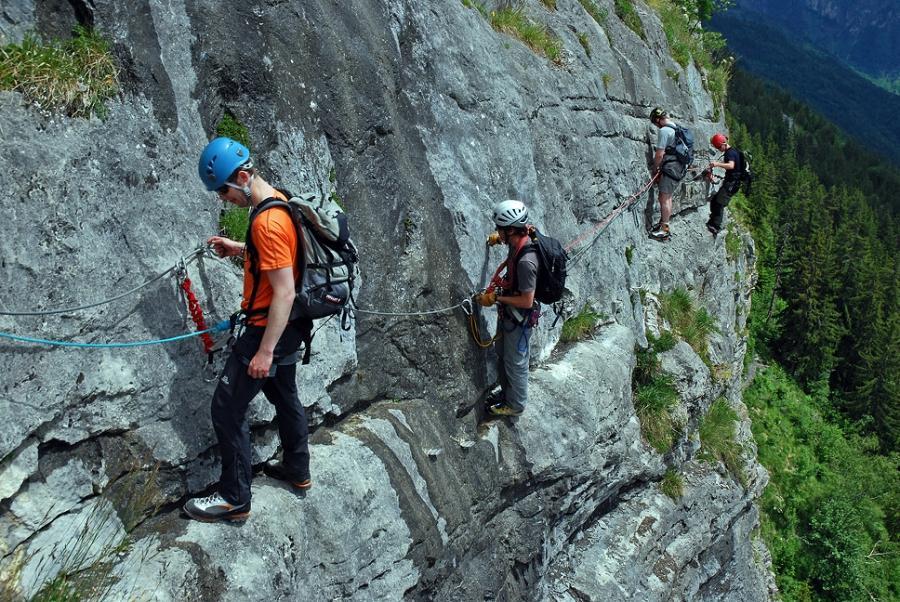 Via Ferrata – Trekking with a Twist!

As a hill walker and trekker you may have enviously viewed posters and videos of climbers hanging from their finger tips on huge alpine cliffs with the sweep of the rock face falling away below. Well, fear not, you can join them with only a few hours of training and a head for heights.

Over the past ten years via ferrata (literally ‘iron paths’ in Italian) have snowballed in popularity, allowing people who are not climbers to access some spectacular situations. Via ferratas can now be found across the Alps and even in the UK!

A via ferrata, or ‘Klettersteig’ in German, is a route with fixed protection that helps people move safely on these steep cliffs. In many regions like the Dolomites they link isolated areas and allow parties to do multi day hut-to-hut treks incorporating via ferrata on the way.

Protection on a via ferrata includes a combination of thick steel cables, metal bars, steps, ladders and bridges. These are usually bolted and glued to the rock face allowing people to clip into the protection and be safe at all times.

Modern via ferrates are constructed all over the Alps as a way of attracting adventure tourism to the area. They are usually professionally equipped and funded by the local government. This was not always the case as the ‘iron paths’ were initially built to allow movement of Italian troops during WWI in the Dolomites. In 1915 Italy joined the war on the side of Britain, Russia and France. At that time the Dolomites were still part of the Austro-Hungarian Empire, a member of the opposing Central Powers. The Italian and Austrian armies fought a brutal mountain war trying to gain control of the peaks for the artillery’s line of sight. After losing thousands of troops to falls, and exposure in this harsh mountain environment they decided to construct Via Ferrata to enable troops and equipment to be moved quickly and safely.

After the war, local people and the Italian Alpine Club restored and cared for these via ferrates right up until the present day. The Dolomites now boasts some of the most extensive via ferrata journeys in the world. Many old historical relics, dugouts and trenches can still be seen along these paths.

Who can Climb Via Ferrata?

Any trekker or walker who is not afraid of heights can tackle a via ferrata with a mountain guide. The cables and ladders provide protection so that non-experienced climbers can easily ascend or traverse through the mountains safely. Via ferrate vary in difficulty from easy walks to full on vertical ladders and lots of exposure in the high mountains.

There are two widely recognised rating systems for the via ferrate. The Fletcher Smith system has a number that describes the difficulties, in addition to a letter for the overall alpine degree of seriousness. Based on this, ‘1A’ is a short walk close to civilisation. ‘5C’ is as hard as it gets, and might involve a lot of cable protected rock climbing in a remote mountain environment. ‘4A’ might be challenging rock climbing, but short and close to civilisation.
The Hofler/Werner Rating is a very simple A-G rating. ‘A’ is for the foot-sure mountain walker, ‘G’ describes a via ferrata with sustained sections of steep rock and cable climbing.

How do you climb a Via Ferrata?

Harness – Any harness will do, but a comfortable climbing harnesses is best. Here are a few recommendations: Wild Country Ziplock, Edelrid Apex 4B, Black Diamond Aspect.

Helmet – Foam helmets are very light but not as hard wearing as plastic ones. Either type will do a good job of protecting your head from rock falls. Recommended: Wild Country 360, Grivel Salamander, Petzl Helios.

Gloves (essential for gripping the steel cables as some can be very rough!) - Climbing belay gloves are ideal for this job. Heavy-duty leather is a must as fleece and rubber wears very quickly. I have seen gardening gloves and leather work gloves used, but they aren't as dexterous or hardwearing as the belay gloves. Recommended: Petzl Cordex Climbing Gloves.

Via ferrata safety clips all work in a similar way. They have a shock absorbing system that dissipates any load in the event of a fall. Mind you, falling off is never a great idea! Any brand’s equipment will work, but have a play with the clip ends to test which are simpler to use than others. Try the following: Mammut Tec Step Bionic Turn 2, Petzl Scorpio Vertigo.

Once you have put on your helmet, your harness, and attach your Y-configured via ferrata clips you’re ready to go!

When beginning your climb you will attach and lock both karabiners onto the wire cable of the via ferrata. Each time you reach a place where the cable is attached to the rock (usually a steel bar, bolt or stanchion), you will need to individually unclip and re-clip your karabiners beyond the attachment point. This must ALWAYS be done ONE AT A TIME, ensuring that you are ALWAYS attached to the cable by AT LEAST ONE KARABINER. The moving of one clip at a time past stanchions is pretty easy to pick up: after a few metres you'll be jogging up the cliff! On via ferrata with vertical cables it is advisable to make sure there is only one person at a time between stanchions so if someone falls they don't land on your head!

This all sounds pretty simple. Well, generally it is - but bear in mind you are on a cliff face in the high mountains! The reason people use IFMGA Guides like the team at Mountain Tracks is so to minimise the other dangers when on the cables. Furthermore, poor weather can make route finding tricky between un-cabled sections. Mountain weather can change very rapidly and via ferrata cables are not the place to be in a thunder storm: you could have an electrifying experience! In addition, journeying between via ferrata and mountain refuges can involve complex mountain navigation.

A Selection of Classic Via Ferrata includes:

Day Hits
There are now hundreds of via ferrata across Europe to choose from. Take care: regional grading variations can catch people out. It's worth asking at the local mountain guides office or tourist information about the via ferrata's technical difficulties before you have an epic undertaking! There are some good guidebooks to help you discover them.
France – Via Ferrata: A Complete Guide to France
Italy – Via Ferrata in the Italian Dolomites (Vols. 1 and 2)
Switzerland – Via Ferrata Switzerland

Multi Day Tours
If you want a week of this exhilarating sport journeying through the mountains then these trips might be of interest.

Bochetta Way
The Via delle Bocchetta or ‘Bocchette Way’ is one of the great mountain journeys of the Alps - an epic hut-to-hut traverse of the main Brenta range taking you through some of the most spectacular rock scenery in the Dolomites.

Swiss Via Ferrata Tour
Switzerland has a great selection of world class via ferrata routes - in total around 50 in all (with new routes being equipped every year). Based in the Swiss Valais, this course tours the most famous and spectacular routes and guarantees an exhilarating week of Alpine adventure.

Whether you’re the ‘DIY’ type or taking part in an organised trip you’re guaranteed to have a spectacular time! I always enjoy Italian via ferrata trips especially as the food and coffee in the huts are superlative!