Get the knowledge: Ski Touring Skills 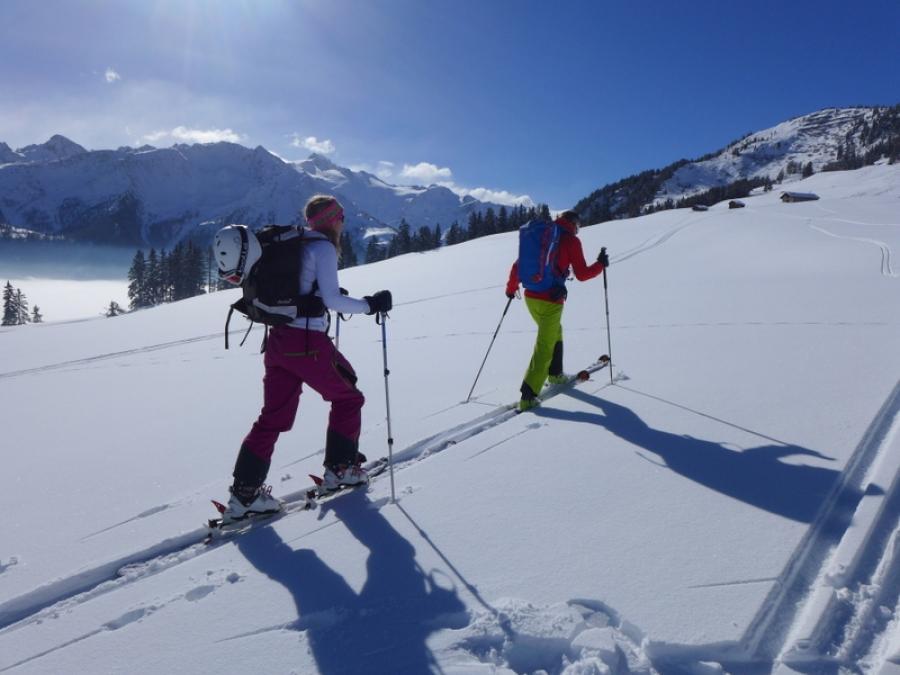 For the uphill ‘skins’ are attached to the ski via a re-useable adhesive. The skin is like carpet pile and only allows glide in one direction, up hill. When you reach the summit the skins are removed and the terrain is skied downhill in a similar way to an off-piste skier.

You can ski tour virtually anywhere where there is snow, the Alps being the main destination for most UK-based ski tourers. The touring season in the Alps runs from January to June, but most linked tours take place from March to May as this is when most of the mountain huts are open. In January and February the avalanche conditions, volume of snow and weather can hinder ski touring. The length of trip varies from day tours returning to the valley, hut-to-hut tours where nights are spent in mountain huts - or a combination of both. Ski safaris are like 'hut-to-hotel' tours involving ski lifts to gain the majority of the uphill.

Ski touring can be hard work, with long uphill sections and sometimes challenging snow on descent. However the effort is well worth it when you get fresh powder tracks well away from the madding crowd!

You need to be reasonably fit to ski tour, skinning up hill is similar in aerobic level to going for a jog! The fitter you are the more you will enjoy the scenery and skiing especially when you add the weight of a rucksack and variable snow. If the snow conditions are difficult on the downhill then it can be very tiring falling over and picking yourself up. Some ascents can be a few hours long, thus good endurance is advantageous.

If you have a desk job and don’t regularly participate in sport you will most probably struggle unless you do some training first. That said, engaging in aerobic sports such as hillwalking, distance running and cycling are good preparation for ski touring. They provide a more similar workout than most ball games. Raising your fitness levels involves undertaking activities at a level that makes you sweat and puff for at least half an hour three times a week.

The better off-piste skier you are the more you will enjoy ski touring. You need to be comfortable on red and black runs and have some off-piste experience. This doesn’t mean you have to be a Jedi, but solid on your skis and the fit to cope with fluffy powder, spring snow, ice, crud breakable crust and everything in between. A good way of improving your off-piste skills is on a Mountain Tracks Off-Piste Performance course, designed and run by our dedicated team of instructors who will turn you into Jedi skiers.

Most ski tourers use 'Alpine' touring equipment, but if you really want to make things entertaining then you can tour on modern 'Telemark' equipment. Some people say 'free the heel (Telemark skis have a free heel) - free the mind', I say: 'misery sticks'!

You can rent sets of ski touring equipment in most good ski shops. Buying your own setup can be expensive, but if you’re in it for the long run then it’s well worth the outlay. Essential Items include:

Touring Skis – Lots of choices, they tend to be about 85mm under foot and reasonably light (1600g)
Bindings – Dedicated ski tourers use Dynafit-style; a more general tourer would use a Fritschi binding.
Boots – These need to be comfortable for walking / skinning in and have a Vibram (rubber sole).
Skins – They are either cut to fit the shape of the ski or are supplied with some skis pre-cut.
Couteaux (harscheisen) – Ski crampons that help the ski grip icy tracks on the way up (like a skin aid).
Transceiver / Shovel / Probe – Essential avalanche safety equipment that everyone carries.

It will also be necessary to have suitable clothing, rucksack, ski goggles etc. In addition to this, for glacier travel you will need a harness, and for trips involving some climbing, crampons and an ice axe.

If you are starting from a skiing background and already have a reasonable level of off-piste skiing skills, then probably the best way to get started is attend a Mountain Tracks Introductory Ski Touring course. This course will provide you with a good grounding of the basic uphill techniques, avalanche awareness and equipment advice.

If you are starting from a mountaineering background, it is probably worth considering whether it would be worthwhile to attend a Mountain Tracks Off-Piste Performance course first, to make sure that your skiing skills are sufficient to enjoy ski touring.

Having attended an introductory course many people have the ambition to ski the Haute Route from Chamonix to Zermatt, which is perhaps the best-known ski tour in the world. However, this is quite a challenging route, and it is probably best to ski tour in an easier area first to ensure that your skills are honed, ensuring that you will be able to enjoy the Haute Route when you attempt it.

Mountain Tracks has a range of ski tours in different areas that all suit relative touring novices.

Easier hut-to-hut and day tours include:

Ski Safaris (lifts are used to gain height and hotels are used instead of huts) include:

Klosters – Andermatt Ski Safari, has less uphill effort, but your off-piste skiing ability must be good.