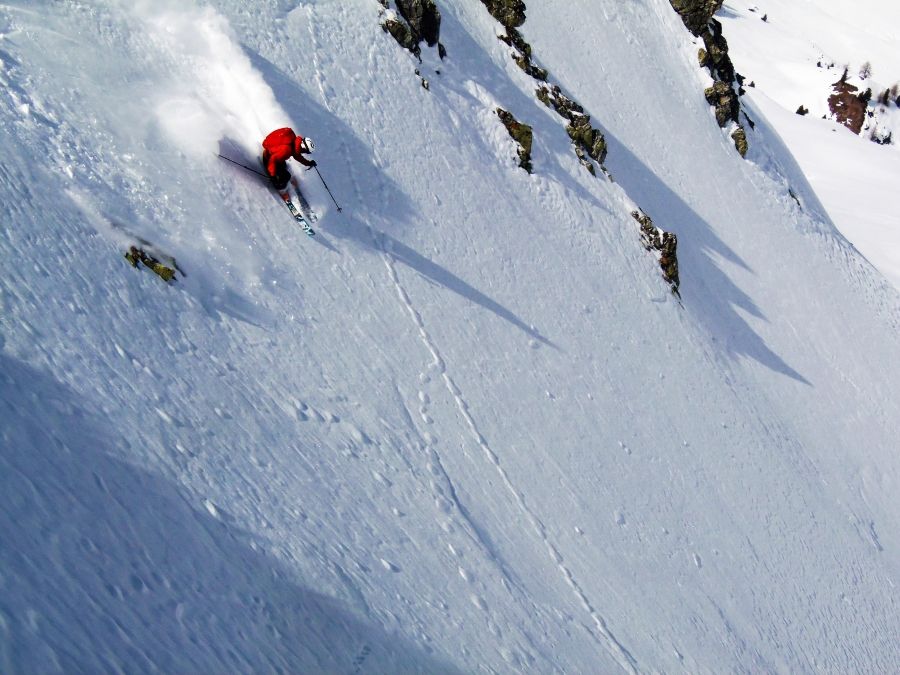 Chamonix of course needs little introduction or promotion. It is firmly established within the world ‘Top 5’ in skiing. It is a spiritual home for many experienced and well-travelled skiers. But many intermediate skiers ask the question - why?

Web forums and resort reviews are always full of critical comments about the bus services linking areas, very little ski-in-ski-out accommodation and powder that gets hoovered up by skiers during the first hour of the day. So what’s so great about Chamonix (other than the Vallée Blanche) - there must be something and how do I find it?

For me the answer is day touring. Yes it means effort, and yes you will need to use a guide, but it’s all worth it, and once experienced it's clear why Chamonix is always in the hall of fame. Including a multitude of different variations there are literally hundreds of possibilities for day touring. Here we look at five of my favourite routes. All are established classics, well known by both locals and visitors. The completion of these five tours will give a magnificent introduction to skiing in Chamonix and Argentière. Enjoy! 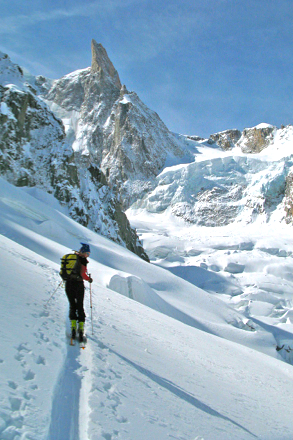 This is a varied tour offering breath taking views amongst granite peaks and gigantic glaciers. The route takes us from the top station of the Grands Montets to the village of Le Tour situated at the head of the Chamonix valley. The route features one ascent and two large vertical descents always with a grand ambience. A number of famous peaks are close by, notably the Aiguille Verte, Aiguille du Chardonnet and Aiguille d’ Argentière.

After crossing the Argentière glacier, we begin a 2-hour skin towards the Col du Passon. The slope is southwest facing: thus do not do this tour late in the day especially when warmer in spring. Sometimes it is necessary to boot pack the first section off the moraine.  The up track is generally well-established and leads to a place where the trail steepens dramatically. Here we place our skis onto our backpacks and climb a narrow couloir to the col. Sometimes crampons are necessary. The top of the couloir marks the highest point on the route.

Once on top of the Col de Passon we cross over to the other side and it’s all down hill to the village of Le Tour, many routes are possible on this 1700m slope! The most logical route is pretty much straight down and bearing to the right as we near the base of the valley. The terrain is undulating, never steeper than 35 degrees. Often powder is present, but certainly not always, wind blown snow is quite common here. The route ends on the nursery slopes of the Vormaine next to Le Tour.

This route is one of the finest in the whole of the Alps, the highlight being the descent right beneath the huge North Face of the Grandes Jorasses.

The terrain is largely glaciated, with and a steep bootpack ascent up a long couloir to reach the col.

We begin by taking the Aiguille du midi cable car to the top station, and descend Vallée Blanche route to the base of the Salle à Manger bellow the giant icefall. To add extra spice to the route, I recommend taking the Italian side (S) of the Giant Icefall. Once level with the Requin Refuge, we start skinning up the Périades glacier, which lies to the right of the main Mer de Glace.

As we begin on the upward march the track seems to lead nowhere because at the back of the corrie is an impenetrable wall, but as we gain height, we see there is a hidden couloir at the back. Once at the base of the couloir we begin a long bootpack (crampons sometimes necessary) to the Brèche Puiseux.

From the col there is normally a rappel of about 50 metres. After a well-earned break we then begin one of Chamonix's wildest glacial descents right below the enormous wall of the Grand Jorasses (one of the 3 great North faces of the Alps). The route down the Mont Mallet glacier is heavily crevassed and great care is needed (plus crevasse rescue competency), this eventually ends up on the gentler Leschaux glacier, from where we re-join the Vallée Blanche route back towards Montenvers and then Chamonix (train or ski possible).

Snowboarders: Yes (but a long way in snowshoes, and a few brief flat sections) 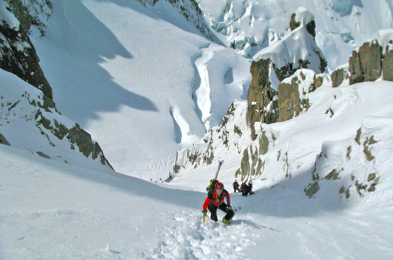 This tour along with its many variants is perhaps the best known in the area. However this does not distract from its quality and should not be missed. The tour traverses the Aiguille Rouge massif beginning at La Flegere (not far from Chamonix town) and ends close to the Swiss border many miles to the east at a charming hamlet called Le Buet. Even though the Aiguille Rouge is significantly lower than its big brother the Mont Blanc Massif, it is still a steep and serious range that demands the upmost respect. The Aiguille Rouge is unique in that it gives a deep bird’s eye view of Mont Blanc, Aiguille Verte and the other high peaks of the Mont Blanc range.

From Chamonix we take the La Flégère lift, followed by the Index chair and the Floria draglift to the top. The tour starts by skinning steeply up from here, towards the Aiguilles Crochues. Here we always encounter delicate kick turns (take care when icy).  After a short, steeper boot pack section we arrive at the Col Crochues itself. After a break we ski down the other side for just a short way and then begin a long traverse to the right around the head of the Bowl. The traverse takes us past a steep bootpack trail leading up to the steep ‘Glacier Mort’ variation, but we leave that for another day and continue on the traverse until it starts to rise uphill.  We switch back to our skins and make a further 40 minute skin to the second highpoint - the Col du Berard.

The descent from the Col du Berard is always beautiful and exciting; we enter a huge deep valley system, completely enclosed by soaring rocky peaks. Initially the slope has a good northerly aspect so great powder can be found. Once at the base of the valley, the tour meanders through forested glades, and eventually ends the village of Le Buet. Here there is a rustic tavern to celebrate your trip followed by a train back to Chamonix.

Special Equipment: Ski crampon could be needed if icy

Another of the classic tours within the Aiguille Rouge. After completion of the classic Crochues-Bérard traverse this tour offers a step-up in difficulty. Lying to the East of the col Crochues lie a series of, high cols which give access to the large, steep, north facing slopes of the Bérard valley. The Belvedere takes the first of these cols. Undoubtedly this is an exciting trip, because on the far side of the col, a roped descent and a 40 degree slope await.

From Chamonix we park and depart from the Flégère ski area, and once arriving at the top of the index, lift, we take the short Floria drag. From here we ski on the main piste for a while before taking a high traverse on the left, crossing over the top of a cliff band, great care is needed here in icy or crusty snow. Once flat ground has been found we make a 2-hour ascent by skins to the top of the Col Belvedere. From this view point we can look to the south and the famous peak of Les Grandes Jorasses, Aiguille Verte and Le Dru.

The descent starts by a rappel down a steep couloir, carrying our skis on our packs. The length of the rappel(s) varies with the snowpack. At the base of the rope clipping into our skies is challenging on the steep slope, but nevertheless it’s possible. The ski descent is long and magnificent veering left then right down into the Bérard valley and eventually popping out at the small mountain village of Le Buet at. From here we return to Chamonix by train through the tunnel under the Col des Montets. 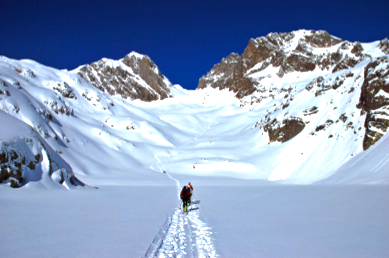 This tour is a personal favourite of mine, and never fails to impress. The journey takes us from France to Italy and back to France passing through some of the most impressive high mountain scenery in the whole of the Alps. The whole journey takes place on immense glaciers, with an abundance of sculptured ice and deep crevasses.

We begin on the highest lift in Europe, the Aiguille du Midi (3842m) and using a short rope and crampons we descend the arête. Once with our skis on our feet we depart as for the Vallée Blanche, but as we near Point Lachenal we break to the right and skirt under the Gervasutti couloir  and ski gentle slopes under the huge east side of Mont Blanc du Tacul (usually fresh tracks here) to a large and complex icefall. From here (Pointe Adolphe Rey) we skin carefully through the icefall, crossing the border between France and Italy and up to the Torino refuge, where we stop for Italian coffee. Then we continue skinning up the Glacier Noir towards the Dent du Géant (4000m) and at a flat col we change back to downhill mode for the long descent back to Chamonix.

The descent from here is very exciting indeed, a huge north facing glacier slope is below us and bellow that the tumbling Géant icefall. This area is remote and seldom tracked. The terrain is fairly steep at just above 35 degrees, but nevertheless, very skiable. We pass through a unique icy gorge, and eventually exit onto the Mer de Glace on the right hand side. This is where we re-join the regular Vallée Blanche route. 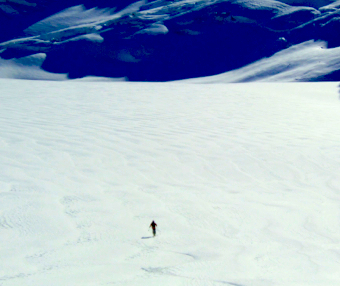