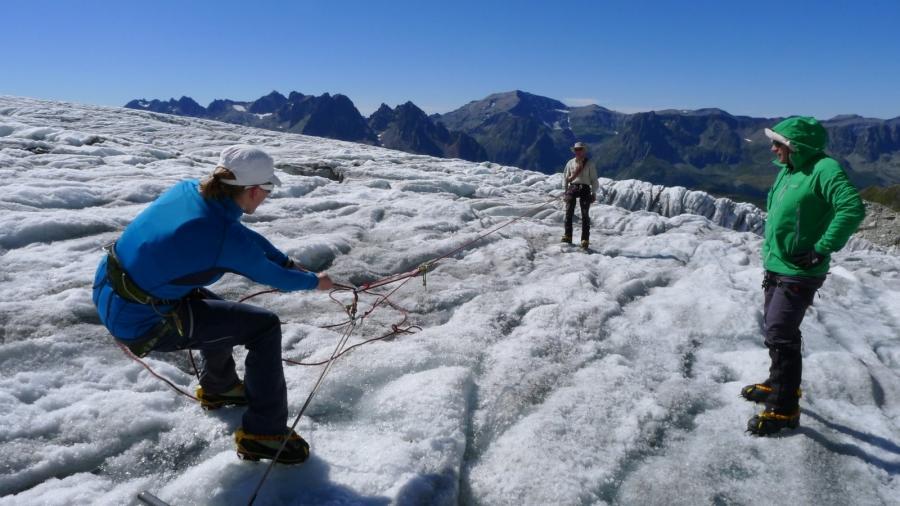 As skiers or alpinists you may be crossing glaciated terrain which has visible or hidden crevasses. Crevasses are more prevalent where the glacier crosses a convexity and steepens or on the inside and outside of bends. The later in the day you are the warmer the snow bridges and thus great likelihood of falling in or a snow bridge collapsing, so get out early!

In addition to the usual kit mountaineering kit you’ll have to be wearing a harness and carrying on it an ice screw, two prussik loops (or mechanical equivalent), two snap link karabiners, four screw gate karabiners and two long slings. In addition to this the party will need carry a minimum 30m of 8mm rope (this depends on the number in the group and climbing objective). An ice axe and crampons are essential to stop you skidding around on an icy glacier whilst setting up a belay!

The first thing to remember if someone falls into a crevasse is stay calm and make sure the rest of the group is safe. Your priority is to regroup and try and communicate with the person down in the crevasse. Bear in mind if they’ve fallen in a long way, ice is a good insulator so communication may not be possible unless you have line of sight. For this reason someone will have to build a safe belay using skis, an ice screw or the combined weight of the rest of the group tied on the end of the rope. Someone will need to attach themselves to the rope with a prussic loop and look into the crevasse. The easiest way to pull someone out is to then get the group to walk backwards tied to the rope. Take care as the edges of crevasses can be overhung and the rope will cut into the lip of the overhang trapping or crushing the rescue victim. This can be avoided with slow extraction in addition to padding the edge of the crevasse with ski sticks or rucksacks. If you haven’t got sufficient numbers to do this the victim could prussik out. This is an essential skill well worth practising. It involves using prussik knots to ascend the hanging rope. Prussiks can be made using a meter of 6mm cord tied in a loop. One is attached to stand in and the other to sit on. Sliding them up the rope independently allows ascent, this can be speeded up using mechanical rope jamming devices such as a Ropeman or Tiblock. If all else fails you’ll have to pull the victim out using a pulley system. This is constructed by threading the rope through a karabiner attached to the belay attaching a prussik to stop slippage and running a loop down the rope to another prussic (building a 3:1 pulley system). This process can be made more efficient by using self-locking or free-wheel pulleys and mechanical jammers in the system.

Crevasse rescue is a complicated business and needs to be practised as it is very easy for the inexperienced to make the situation worse. If in doubt shout for help, get on your mobile phone, hire a guide or attend a course teaching these skills.

Despite this if you have sufficient rope between each member in the party it can be done (two people 20m, three people 15m and so on). The more people in the party the safer it is but as a rule of thumb there should be no less than 8m between each person in large groups so you may need a long rope! Critically there should be no slack anywhere in the system so never carry hand coils and keep the rope taught. Make sure you tie coils off correctly and if you’re really worried tying overhand knots in the rope 3m from each end and one in the middle should be enough.