A closer look at the Haute Route 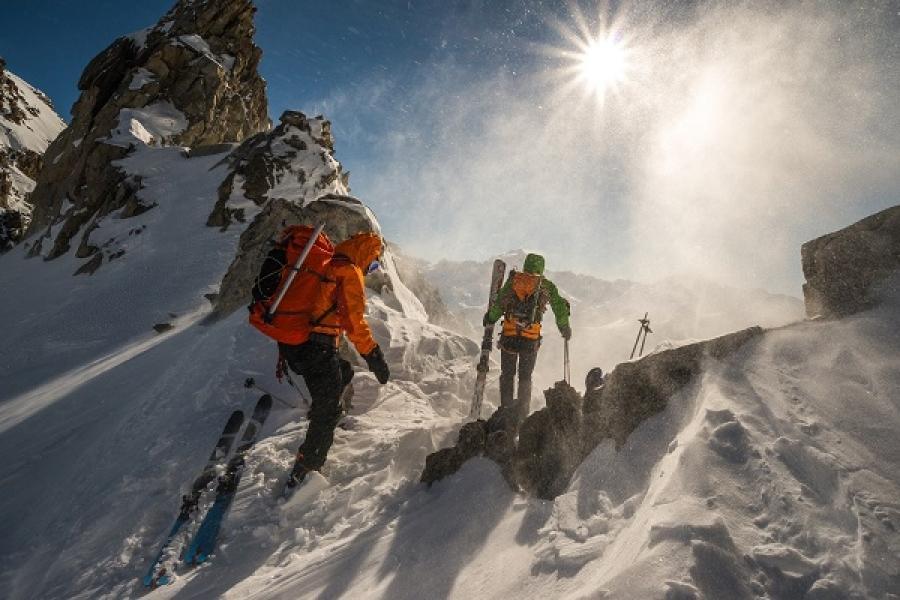 The Haute Route is the most famous ski tour in the Alps. Here we have a closer look at the route, the extensions and the variations to this classic voyage.

It is one of the most spectacular high mountain ski itineraries in the world, making its way over remote alpine passes and traversing huge glaciers. There are constantly changing views and surprisingly varied environments. The Haute Route is a journey that every ski touring enthusiast should undertake at least once in their career.

The crossing takes 5 or 6 days depending on the route taken (or longer on the Grand Lui or Saas extensions). There is an excellent system of mountain huts which allows skiers to spend comfortable nights along the route. The huts (also known as 'cabanes' or ‘refuges’) are situated high above the tree line and were originally built by local associations and sections of the Swiss Alpine Club early in the 20th century to provide shelter and lodging for mountaineers. Most of these huts have now been renovated to provide accommodation of a surprisingly high standard.

The Haute Route is an advanced level ski tour. For more information on what this means along with information relating to equipment, dates and prices please consult our dedicated Haute Route page: https://mountaintracks.co.uk/trip/haute-route-ski-tour 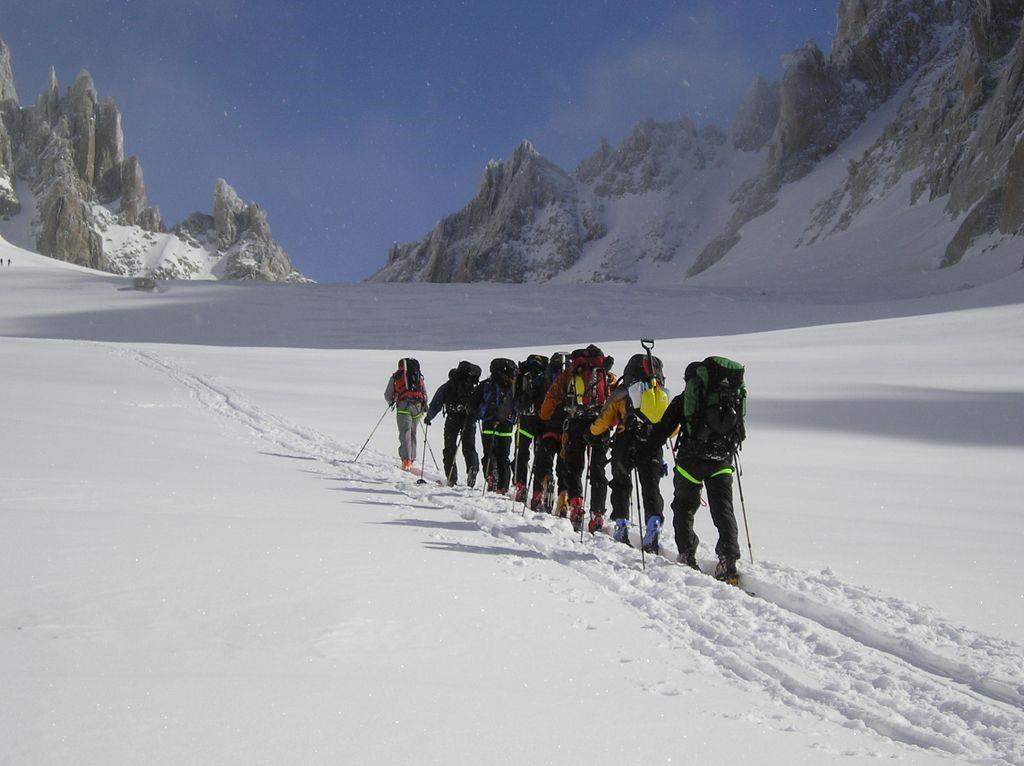 (Skinning up to the Col de Chardonnet)

The Haute Route and all its variations involve the crossing of the high alpine terrain within the central Alps between Chamonix and Zermatt. The original completion of the Haute Route, firstly on foot and then later by ski, is one of the most celebrated mountain journeys and a milestone in the history of alpinism. The route was pioneered by members of the British Alpine Club with local guides in the 1860s and dubbed the "high level route" - this was translated into French as the "haute route."

The first successful traverse by ski was in 1911 by a Chamonix doctor named Michel Payot. After having followed the summer walking route he judged that crossing to Zermatt by ski was feasible. He was joined on the adventure by local mountain guides Joseph Couttet, Alfred Simond and Joseph “the red” Ravanel. They skied on 2 meter long wooden skis, with climbing skins, leather boots and a single wooden pole.

The Haute Route via Verbier is by far the most popular version of the Haute Route, and is the way taken by the majority our groups. The skiing is excellent and varied, each day offering up-hill and downhill challenges.  We use the Verbier Haute Route, because it gives us good flexibility with the weather and conditions and the greatest chance of finishing the tour.

This route diverts from the Verbier route at Champex at the end of the Val d’Arpette. Instead of travelling to the Verbier system, a departure is made form a small settlement at Bourg St Pierre, situated some way below the Grand St Bernard pass. The longest up-hill section of the route (1600m of ascent) begins here to the Cabane de Valsorey (3030m) passing through an interesting gorge and onto the flanks of the Grand Combins.
After a night in the Valsorey Hut we climb steeply up to the Plateau du Couloir. Most of this section is done on foot with boot crampons with skis fastened to the packs. The slope reaches about 45 degrees at its top. After reaching the Plateau a short decesnt is made over the Col du Sonadon (3504m) and then an impressive descent of the Glacier du Mont Durand. Once at the base of the glacier there is a short climb at the end to reach the Cabane du Chanrion (2462m).The next day is a comparatively straightforward skin to the Cabane des Vignettes up the Glacier d'Otemma. Once at Vignettes the itinerary is the same as the Verbier route.

The first day begins at the top of the Grands Montets cable car in Argentiere and initially involves a descent of the Argentiere Glacier. A long skin follows to the Col du Chardonet, and then an abseil decent to the Saleina Glacier. From here another ascent up and over the Col de Saleina leads into Switzerland and the Trient Glacier. After an overnight in the Cabane du Trient, a long descent is made down the beautiful Val d'Arpette. This is one of the longest and best descents on the Haute Route.

The descent deposits the party at valley level in the small town of Champex.  A short distance by road is necessary to cross the wide valley which separates the Mont Blanc massif and the Valais massif. A taxi is used to the base of the Verbier lift system which is then used to get back up into the high ground. From the Col des Gentianes a descent is made close to the Mont Fort refuge before a skin up and over a high plateau and three cols to the summit of the classic ski peak: Rosablanche (3336m). The peak has an exceptionally good north face and glacier run out which is descended to the Prafleuri Hut where the night is spent.

The next day is spent traversing Lac Dix and then making the long ascent to the Dix hut. From the Dix hut a spectacular ascent of the Cheilon Glacier is made up over the Serpentine pass (crampons often necessary) and on to the summit of the Pigne d’Arolla which is the highest point on the Haute Route. Another spectacular descent follows, often in powder to the Vignettes Hut. It is essential that a good nights rest is had at the Vignettes, as the final day is the longest and most strenuous. On the final day the alarm rings at 5am and a departure no later than 6am is used. Three cols must be crossed: first up over the Col d'Evêque, then over the Col du Mont Brulé (crampons and ice axe necessary)and finally the Col de Valpelline.  From the Valpelline (3700m) there are magnificent views of the North Face of the Matterhorn and the many 4000m peaks of the Monte Rosa chain. From this point one of the greatest ski descents in the whole of the Alps begins down the Stockji Glacier to Zermatt. 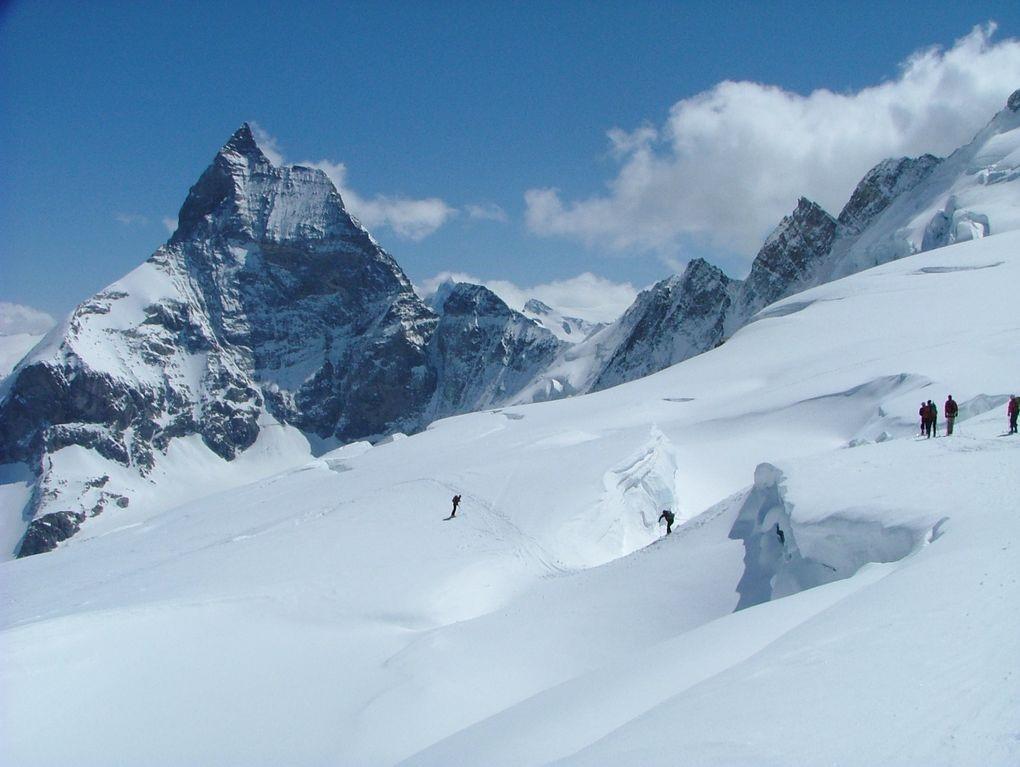 (Enjoying the ski down past the Matterhorn into Zermatt)

The Grande Lui is a longer and more technical route which eliminates the road break of the Verbier and Valsorey variations. The Grande Lui is for purists who wish to travel by foot for the whole way. This route adds an extra day to the Valsorey route.

From the Trient hut (end of day 1) ski over the Grand-Lui through the Col du Saleina or around it via the Swiss Three Cols and a long descent to La Fouly. Then skin up the Val Ferret and over the pass to the Grand St. Bernard Hospice. The hospice is a working monastery and offers a very interesting place to stay.

The next day is down to Super St. Bernard and over the shoulder to the Mont Velan hut and a junction with the Valsorey route.

Once in Zermatt it is possible to continue east, over the spectacular Adler Pass down to the famous mountain town of Saas Fee. This gives the opportunity to cross the Mischabel range, and pass directly below the 4000m peaks of the Strahlhorn (summit possible), Rimpfischorn and Allalinhorn. This extension takes an additional 1 or 2 days, the overnight in the Britannia hut being optional. This is a beautiful and sought after extension for those with energy to spare after the Haute Route.

From the centre of Zermatt the Gornergrat railway and Stockhorn cable car are taken, then a short ski down onto the Findelen Glacier. Then a long and steep ascent to the Adler pass (3802m) followed by a long descent past the Britannia Hut (optional stay) and on to the town of Saas Fee.

Although certainly not the real Haute Route, the ski safari is ideal for anyone who wants to enjoy the Haute Route region with great backcountry skiing and touring but have a more relaxed trip than the high-octane challenge of the Haute Route itself. It also offers the comfort of hotels rather than using mountain huts. The safari route follows closely to the ‘walkers’ haute route which crosses the none-glacial valleys to the north of the Classic Haute Route. The ski safari links the ski domains of le Tour, Verbier, Nax/Mt Noble, Unterbach, Grimentz, St Luc and Zermatt. 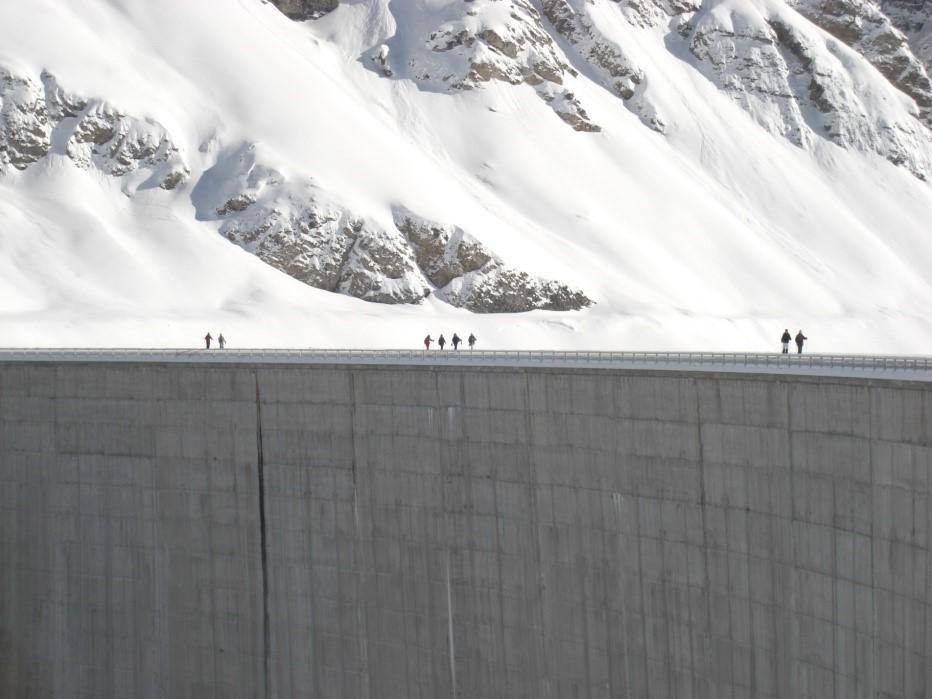 (Crossing the Moiry dam on the Haute Route Ski Safari)