Climbing on Stanage Edge: Four of the Best

Stanage, is the longest and finest outcrop of gritstone in the UK. Truly the king of moorland gritstone. The edge, located in the Peak District national park, stretches for 3.5  miles across heather moors from its northern tip at Stanage End to the southern point near the Cowper Stone.

Climbing on Stanage began in the 1890’s, but early development was significantly curtailed by access restrictions. Originally a private grouse moor and the early pioneers of rock-climbing were forced to make secret visits or bribe the gamekeepers with barrels of beer. Today, the area is owned by the national park and is an extremely popular outdoor recreational area . Climbers have been very active and over 2000 routes have now been recorded, the edge is used by hundreds of climbers from across the country every week.

The cliff itself attains a maximum height of 25 metres, but for most of its length it is between 10 and 20 metres high. Throughout its length, the edge displays many shapes and complex formations. Slabs, walls cracks and overhangs abound. Climbers need to be versatile to climb well on Stanage, both delicate and strong. Extreme balance problems exist side by side with brutal struggles of strength and will.

Due to the sheer number of great routes, selecting a handful of climbs is a little arbitrary. But nevertheless this pick of 4 gives the flavour of Stanage and any climber completing these four would walk away satisfied and keen to uncover more of the abundant treasure.

Situated at the right hand, ‘popular’ end, the Flying Buttress resembles a severely overhanging upside-down staircase perched above an inviting easy slab. The meat of the route is a beautiful roof that’s more intimidating than technically hard, the climbing is exhilarating on large rounded holds. The route is considered to be either upper HVS or lower E1, the debate continues, although most climbers are happy to take the E1 tick. Firstly climb the slab, use cams to build a safety net of protection then take a deep breath and head across the roof, first to the right then back left, with heel-hooks, enthusiasm and brute force. This is certainly one of Stanage's finest climbs. 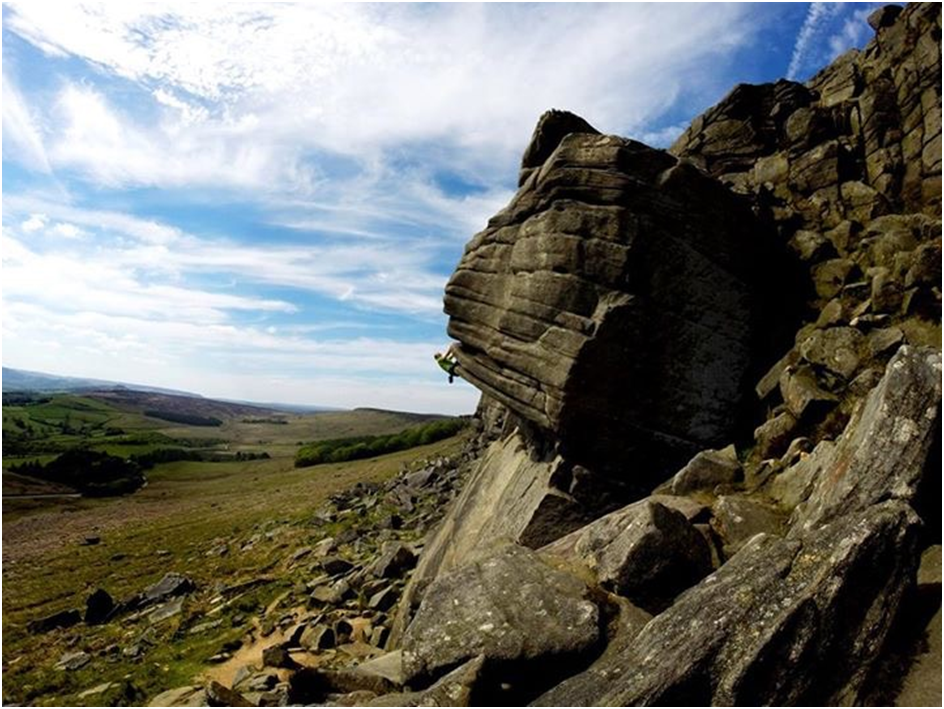 Leaving the sanctuary of a VD slab, feeling your feet cut loose and your adrenaline pump as you commit to a the roof, with no easy way back. Hang off the roof and place a large cam for protection before you arms wilt. Committing and gymnastic moves rarely found on a route of this grade. Nobody has ever been disappointed with Flying Buttress Direct!

There are a lot of great routes at the VS grade, many of which are rites of passage for aspiring gritstoners. But for sheer climbing delight, my particular favourite is Mississippi Buttress Direct.

Mississippi buttress which lies towards the middle of the right hand end, is considered by some to be the finest piece of grit on Stanage. Relatively high and steep at 22 meters, the rock is naturally weathered and features a myriad of cracks, breaks, grooves and small overhangs. Mississippi Buttress Direct is one of the best VS routes on grit and climbs a meandering flaky crack, right in the centre of the wall, which allows steep climbing at an amenable grade.

The climb starts start in a leaning groove right in the centre of the buttress and climbs this steeply to a bridged rest below an intimidating bulge. Pass this awkwardly, rocking up to the left with the hands in solid jams and then follow the flake crack above which gradually eases.

Threading an elegant line at a nice grade through an impressive steep buttress. The feeling of being right in the heart of Stanage on one of the landmark routes at the grade.

This strenuous route is an established classic and a popular route as a first E1 and consequently has been the scene of many leader falls! The Unconquerable buttress lies in the middle section of the crag just up and right of the Plantation area. The style offered by this section of the crag is steep well protected jamming and layback cracks. Left Unconquerable has a famous brother – Right Unconquerable (HVS), however most consider the ‘left’ to be the better route.

The climb starts at a finger-width crack on the left side of the buttress and a few layback moves lead to a good horizontal break where protection is fixed. Another move up gains an excellent jug in the crack, after which a strenuous and precarious layback leads to another horizontal break. From here, the style changes and a tricky sequence involving a high step and small but positive face holds will solve the crux. Near the top the climber is blessed with large holds for tired arms. 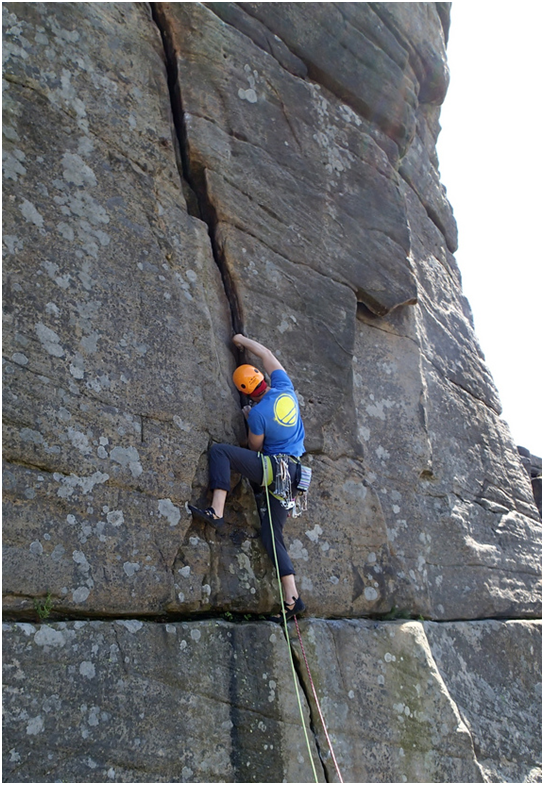 Great holds, great gear, and an arm pumping layback make it a popular test piece. Good to combine along with its easier brother, Right Unconquerable (HVS). Beautiful setting, away from the bustling right hand end.

This route is situated on a large boulder nick named ‘The Grand Hotel’ within the Stanage plantation area. The route is 7m high and cannot be protected so in modern parlance this would be considered a ‘high ball’ boulder problem, but this matter little. The fact is that this is one of the best boulder problems in the country and makes for a very ascetic climb indeed. The boulder its self is a magnificent and huge square block which originally cleaved off the crag 50m or so up the hill. It now sits proudly by an ancient footpath, its smooth faces offering stiff challenges to athletic climbers.

The route itself takes a beautiful, left sweeping, overhanging and shallow ramp from bottom to top. The holds on the ramp vary from excellent to downright poor, and to add to the mix, footholds are rare. The crux of the climb is the first move, which is extremely frustrating to shorter climbers, and yields with a dynamic reach. Once established on the ramp, a series of worrying moves puts the top in reach.

The sheer aesthetic quality of the line, the rock and the backdrop! This problem is world class. The sense of rising adrenaline as the climber gets higher and the ground gets lower.

Top tips for the area

Stanage is subject to every type of weather imaginable, so dress accordingly. The edge will always catch westerly winds so it often feels blustery. The majority of the crag faces south west so gets the sun throughout the day. Friction decreases with the air temperature meaning the harder routes are best climbed on cooler days.

All the climbs are ‘trad’ and require a full set of nuts and cams. The vast majority of routes can be climbed with Friend sizes .5 – 4. The rock is sound with little chance of loose rock or falling stones.

How do you Get There:

Stanage Edge is located to the west of Sheffield and close to Hathersage, the county border between Derbyshire and South Yorkshire runs along the course of the edge. You can reach the area by bus, train, car and cycling routes.

Buses run to Stanage Edge on Sundays and Bank Holiday Mondays during the summer months from both Hathersage and Sheffield.

Buses run all week to Moscar Lodge at the far northern end of Stanage from Sheffield and Castleton. There are also limited bus services from Matlock, Bakewell and Castleton.

There are trains from Sheffield and Manchester to Hathersage throughout the year.
Roads & Car Parks

The area can be reached from Sheffield by taking Ringinglow Road out of the city. There is limited lay-by car parking in the area as well as a pay and display car park and public toilets.

North Lees Campsite: Below the Plantation, £5 per night.
http://www.peakdistrict.gov.uk/visiting/getactive/camping/camping-northlees