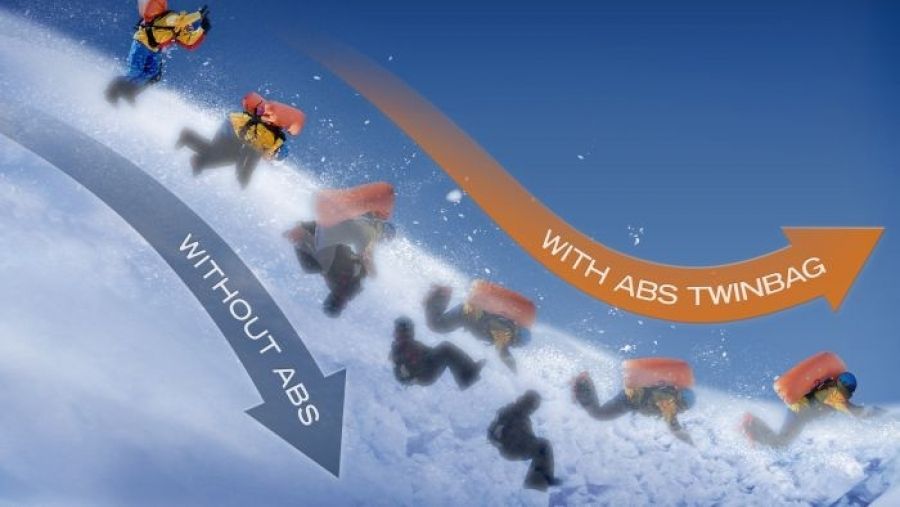 Following my popular articles last season on avalanche airbag systems and avalanche-related risk, this article gives you a useful rundown of what’s on the market in 2013. Avalanche airbag systems are becoming a common sight on our off-piste courses. Just skiing around Chamonix this winter it's noticeable how many people have one strapped to there back with a peaked helmet, mirrored goggles, back protector and fat skis… and looking a little like they’re heading for a combat zone. Maybe I'm not 'new school' enough??

Despite my reservations about people’s attitudes to wearing them (they should always be seen as an additional to smart, knowledge-based avalanche risk assessment and NOT a substitute), you can’t argue with the statistics that IF you manage to deploy your airbag you have an appreciably better chance of survival.

All manufacturers have been busy re-developing their products for winter 2013; Back Country Access (BCA), for example, has 3 new packs which have dropped substantially in both weight and price. Snowpulse have two new packs again with a weight and price decrease. Mammut now own Snowpulse and are developing there own RAS system with an impressive line -up of six new low weight packs. ABS systems are much the same as last year with a slight price increase. Other American brands that rarely filter through to Europe include the WARY Avivest, Avipack and Mystery Ranch.

ABS started the ball rolling in 1985 and most of the airbag statistics come from ABS tests. They are of the twin bag type to provide a large surface area to float you to the top and also the backup f 2 bags just in case one doesn't deploy. ABS argues that the wing design puts the victim in an horizontal position and thus exposed to less dynamic forces of the avalanche. The SLF (Swiss Avalanche Institute) in Davos found inconclusive evidence for this as opposed to 'single pillow' bags.

New for 2012 season (nothing has changed for 2013), the lighter ABS Powder Line is complemented by the ABS Vario Line. Weights were reduced across the board (not by much) with a thermoform back system and more adjustability. The ABS system differs from other packs in that it is filled with Nitrogen and a sealed CO2 cartridge trigger unit. There no valves cables or filling gauges to deal with as in all the compressed air packs. The trigger comes in the form of a removable handle with explosive charge. This sends a shockwave down the line to pierce the cartridge and inflating the two airbags. The airbags' side deployment prevents carrying your skis as an A frame but does allow for rear mounted diagonal sling. Pulling the trigger is very easy which can be embarrassing on the lift. I had a client inadvertently pul the trigger getting out of the lift in La Grave (yes, you should detach or stow away all airbag triggers when on lifts) much to the hilarity of the whole restaurant he was in front of and all his mates rolling around laughing. The trigger is easy to attach/detach but beware it can fall off if iced up and not attached properly. It is also easily lost from the stow pocket so most people attach it with cord to the strap to prevent loss. 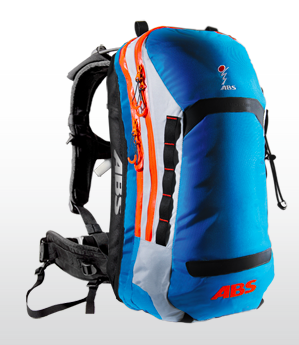 There are plenty of shops in Europe that exchange the ABS cartridges. The ABS system is fully certified for air travel but I think having an explosive charge creates problems when travelling to more exotic destinations. Over the past 5 years skiing in Gulmarg (Kashmir) I have seen more ABS systems questioned due to the detonation cap then other compressed air variants. Be prepared to argue your case and I always carry a copy of the IATA regulations with the paragraph on avalanche airbags highlighted in addition to attaching one round the detached cylinder in my hold luggage.

The packs are well made and come in an array of colours and sizes but on the whole tend to be more expensive and heavier than their competitors. The Vario system allows you to zip on and off different sized packs from the base unit.

Snowpulse was the second company to enter the market and was recently acquired by Mammut. They have revised the 1.0 cylinder system, the new 2.0 being easier to fill. The new Snowpulse RAS system developed by Mammut allows you to detach all your airbag gubbins and use it as a stand-alone rucksack. The old 1.0 system had a webbing loop pull handle, which wasn't the easiest to grab and a 'pin release' cylinder. The new 2.0 system has a plastic handle that folds neatly out of a zipped pocket. The handle is attached to a mechanical cable, which punctures the copper 'burst disc' on the cylinder and releasing compressed air into the bags. They are all refillable at most European stockists and are covered for air travel under the IATA regulations.

The Lifebag Line is unique in the deployment of the airbag from the zipped shoulder compartment creating a cushion round your head and protecting your vital organs. Again, whilst some tests showed that it helped float the victim upright the SLF concluded iresults were inconclusive overall. The 30L and 45L variations are well-built and comfy. I found the old V1.0 rather uncomfortable due to the wide shoulder straps and my bony shoulders (I need to stop climbing and eat more lard). All airbag packs come with some sort of 'between the legs’ strap to prevent riding up when deployed. 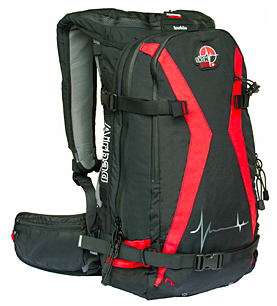 The RAS line developed by Mammut (also branded Snowpulse) have a single pillow like the BCA packs. They’re focusing on lowering the pack weights and their prices in the coming season. It uses the same 2.0 cylinder and deployment system with a choice of a refillable cylinder and an exchange one that you have to return to Mammut. The RAS rucksacks come in 22L and 30L, both smacking of quality from a primo brand like Mammut.

BCA entered the market a few years ago with the aim of lowering airbag systems prices. They have developed the Float 18L and 30L from previous years into the 22 and 32L. Again, this sytem is activated by a handle and mechanical cable line similar to the Snowpulse system. The airbag inflates like a huge pillow behind your head and floats you head up: see the demonstration here. The beauty of this system is its simplicity; the cylinders can be filled from any compressed air source that can pump out 3000psi e.g dive shops, paintball shops and centres, etc. The system it is covered by the IATA regulations and has now gained TUV approval for sale in Europe. 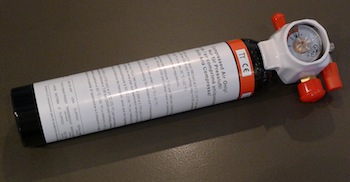 The rucksacks are well made and very reasonable in price (they are the cheapest on the market). The pull handle (a plastic disc) works well and is easy to grab with gloves on. It’s also one of the lightest packs on the market due to the simple and straightforward design. BCA have an online guide outlining where you can get your cylinder refilled in Europe. In France they’ve teamed up with Au Vieux Campeur so that you can get your cyclinder refilled quickly at any of their stores, from Paris to Sallanches or whevever you might be. In Chamonix they’ve also struck a deal with Sanglard Sports, who’ll be happy to refill your cyclinder too: all-in-all the BCA refill method has got to be the most straightforward and hassle-free. 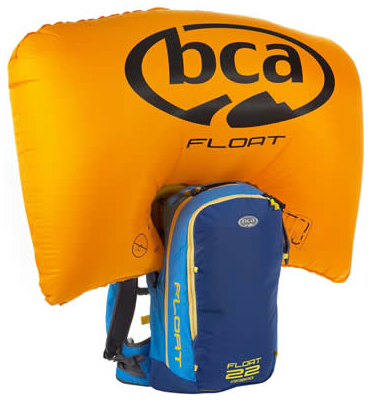 In conclusion, all these airbags work really well, having the same basic functions with the odd bit of 'innovative flare’ (or, you might say, marketing hype!!!). I have tried all the brands and for me it would boil down to cost, weight and comfort. I'm not keen on the ABS systems due to the explosive charge and relatively complicated system. They also feel quite heavy compared to other branded airbags of a similar size. I skied with a Snowpulse 1.0 last year and liked the idea of the round-the-head protection but the rucksack was uncomfortable for me, and the trigger awkward to deploy. Note that if you've one of the older Snowpulse systems you should check the cylinder: the Snowpulse cartridges for the “Inflation System 1.0” have a defective pressure gauge and must be replaced. For more information check Snowpulse's recall page. The new Mammut RAS sacks look very good. I now have a new BCA float 22 and love it - being the lightest and comfiest of them all. It also comes in an electric blue with yellow zips and straps making me look really 'new school' ; )

Whichever one you buy, practice pulling the handle before you have to use it: some packs you definitely have to yank harder than others. For a video demonstration see the deployment of BCA's Float 32 airbag system here: Don't forget to wear the crotch strap or you could end up loosing the bag over your head (not a good idea). The most important thing is to not loose sight of the importance of not getting avalanched in the first place. There is something to be said for reflecting and investing some of your outlay on a decent avalanche course, such as one offered by Mountain Tracks with professional IFMGA Guides.