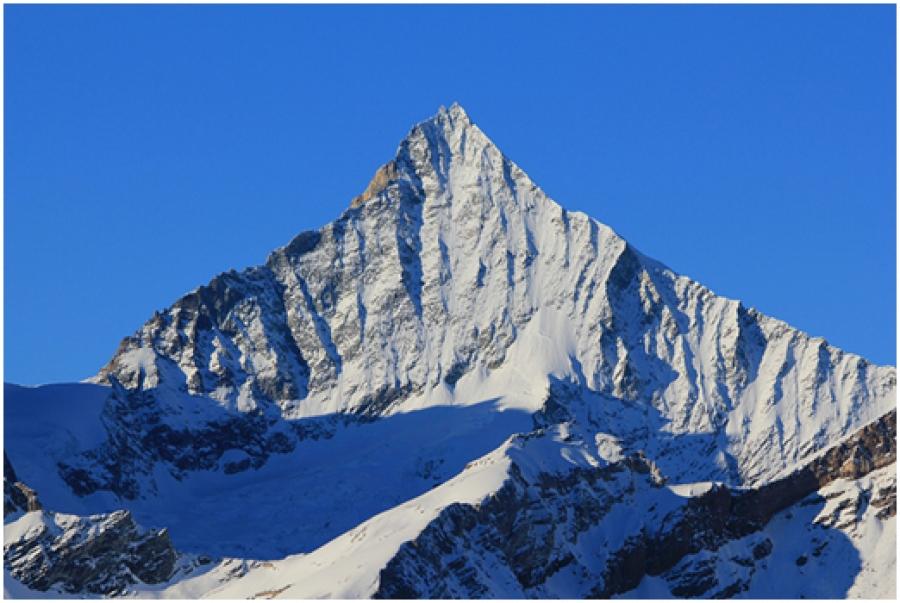 There are 82 ‘official summits’ (UIAA) above 4000m in the Alps, all are magnificent and challenging, having their own personality and unique location. There are certainly no ‘bad’ 4000m summits! However in this article I present 7 of my personal favourites. These seven summits personify classical alpinism and should be on every mountaineers tick lists. I have purposely omitted the most famous peaks of Mont Blanc, Monte Rosa and the Matterhorn in an attempt to broaden the horizons of climbers away from the most popular and well documented challenges.  So if you are looking for your next challenge and also want to dodge the crowds this summer then please read on and get inspired. 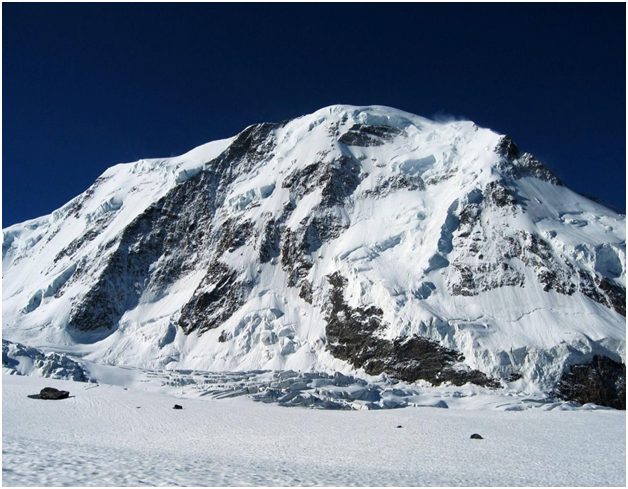 Visually Liskamm is a huge massif, composed of two summits; the eastern summit and the lower western summit separated by a one-km-long ridge. The mountain is often climbed as a traverse consisting of a narrow, snow-covered ridge, with some scrambling over rocks. In good conditions, this route is fairly easy and objectively safe, however in bad snow conditions or bad weather, the ridge can be challenging because of large cornices and narrow passages. The route is elegant and dramatic, characterised by careful and delicate crampon work. The mountain has the dubious nickname ‘Menschenfresser’ (man eater), so it is essential to pick a calm day with good snow conditions! 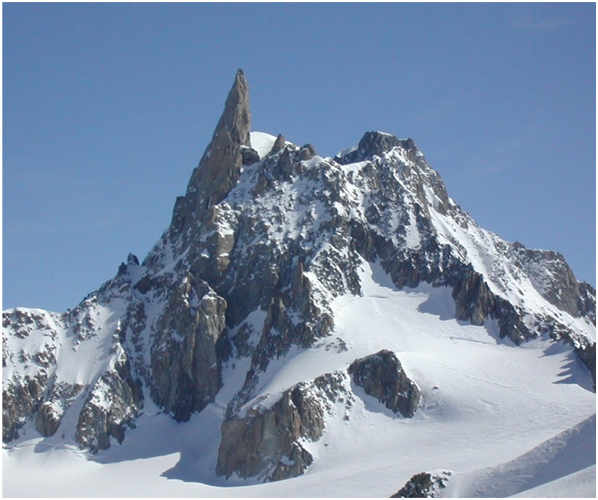 This is an impressive rock needle on the French/Italian border, perhaps the sharpest of all the 4000 meter peaks. The rock is of impeccable quality, the best red granite, and is a delight to climb. Due to the steepness of the rock, the peak remained unclimbed during the golden age of alpinism and didn’t get climbed till the relatively late date of 1882. Now there are fixed ropes on the steepest section which opens the peak to middle grade alpinists. The climb begins by a glacier crossing followed by a long mixed section where the rock can be loose. However once on the rock needle itself, the rock is sound and the climb is wonderfully airy and satisfying with a spectacular view onto the south face of Mont Blanc. The top is extremely sharp with room for only 2 or 3 people to sit. 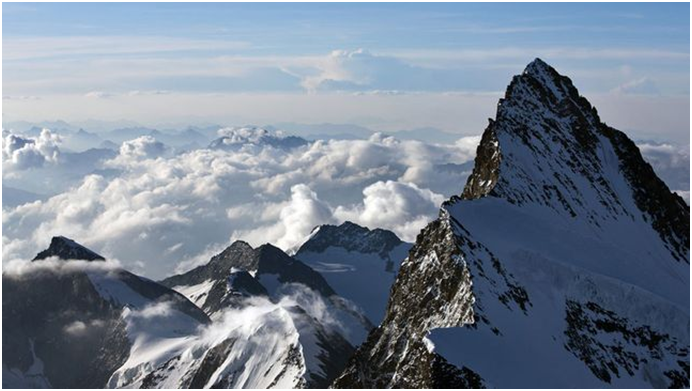 The magnificent sail shaped Finsteraarhorn is the highest mountain in the Bernese Oberland. It is hidden behind the more famous Jungfrau, Monch, Eiger trilogy, but due its height can be seen a great distance away. The Bernese Oberland is a heavily glaciated and remote region and is often said to have has a ‘Himalayan’ feel. The Finsteraarhorn itself has a long approach, making the expedition strenuous and best undertaken over several days. From the impressive Finsteraarhorn hut, the route makes its way up steep glaciated ice fields giving way to a sharp and exposed rock ridge leading to the summit.
Location: Bernese Oberland Switzerland. Start from Jungfraujoch or Fiescheralp. 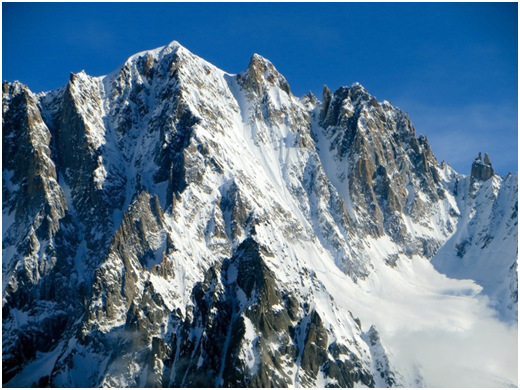 Meaning ‘green needle’, the ‘Vert’ is a beautiful and prominent mountain within the Mont Blanc range and stands proudly above the famous mountain town of Argentiere. The western shoulder of the Vert is a famous peak in its own right: the Petit Dru, a huge vertiginous rock spire coveted by rock climbers the world over. But the summit of the Vert itself is a mountaineers peak and involves a long and varied expedition on glaciers, snow and rock. The mountain gets significantly fewer ascents than one might expect, this is due to the fickle character of the Whymper Couloir which is the easiest route up the mountain. The snow and ice must be in optimal condition for crampons and cold weather is needed to reduce the risk of stone fall. 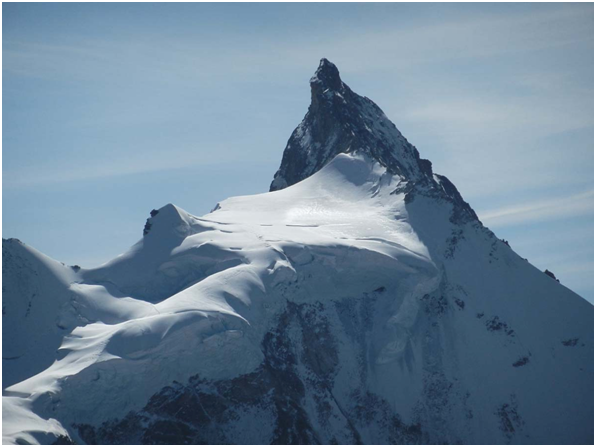 This elegant sharp peak stands above the famous mountain towns of both Zinal and Zermatt. The mountain is situated between it’s more famous neighbours: the Matterhorn and the Weisshorn. The Zinalrothorn offers classic alpinism at its best with incredible views of the Matterhorn’s north face. Both the north ridge and the south-western Rothorngrat offer superb rock climbing at high altitude, the tremendous exposure makes this climb special, there are many sections where the climbers’ feet are perched hundreds of meters above the glaciers below. 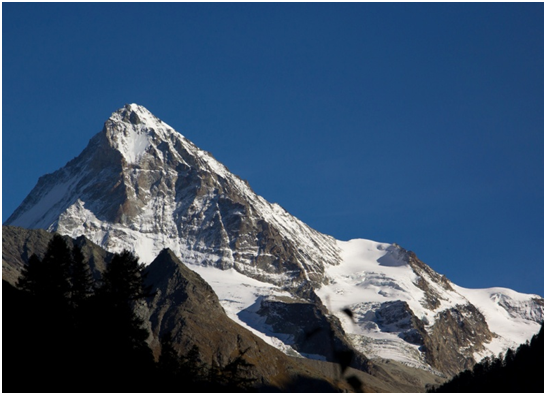 The Dent Blanche, is one of the most prominent and most ascetic of all the 4000ers. Interestingly it lies on the divide marking the linguistic boundary between the French and German speaking parts of Switzerland. The peak is symmetrical in shape with four faces and four ridges dropping onto four distinct glaciers. With no mechanical assistance available from the valley, it is a long walk to the Dent Blanche Hut which is the highest fully catered hut in Switzerland at 3507m. From the hut a long and complex ridge reveals itself with several tricky sections on rock. Again the mountain has a fickle nature and climbers need to wait for good weather and conditions before making an attempt. 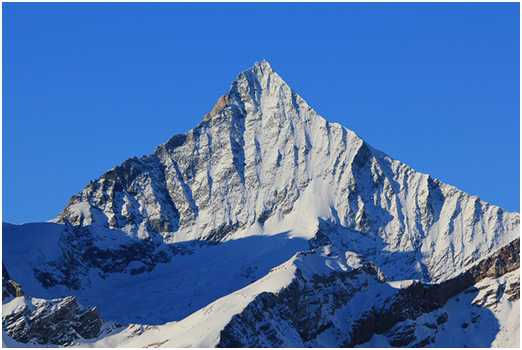 Alpinists consider the Weisshorn to be amongst the greatest of all the alpine peaks, at 4505m it is higher than the Matterhorn and more strenuous and serious to climb. It is nothing short of spectacular on every side with a distinctive pyramidal shape and faces separated by three ridges descending steeply from the summit. Two of these are nearly in a straight line, one running approximately north and the other south.
There is no mechanical uplift at valley level this means that a long apprach march is nesessary to reach the hut. The climb itself is around 1600m so climbers need to be exceptionally fit to attempt this mountain, however the reward is a challenging and exclusive adventure.